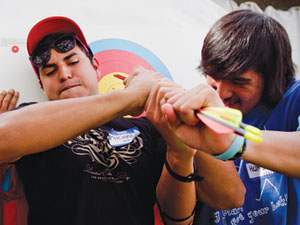 Over the last five months Senior Miguel Gomez could be seen riding his razor scooter over seven miles from CSUN to Woodley Park in Van Nuys with a bow and arrows on his back to practice his new passion: archery.

“I joined the (CSUN archery club) a little bit before December, but it was so hard to find the club. There was nothing that said it existed,” said Gomez, who is the current vice president of the club. “Since I was younger, I had wanted to do archery but I just never had the chance before then. I had to buy my own equipment so I could practice everyday.”

With the help of Gomez and an archery champion coach, the club, which was originally founded in 2008 but had only one consistent member, is developing into an organized, competing force with over 40 members.

“When he cannot practice at my house, he rides his scooter to Woodley. He practices every day,” said June Montenegro, archery club coach of Gomez.

The CSUN Archery Club has recently established itself on the collegiate archery scene. They took third place in the Men’s Team Re-curve Division at the California State Championship in March and their single veteran member, Raymond Paguia, took first place in individual.

Paguia also won first place in the NorCal Collegiate Tournament in the Men’s Re-curve Division in April, and was the only CSUN member to compete.

“When the announcer was announcing the winners, she said, ‘We didn’t know that there was an archery club in Northridge,’” Montenegro said.  “I told her, ‘Yes, and we’re here to stay.’”

“UCLA is well funded by their school. All of their equipment is top of the line. Their bows are like mine.” Montenegro said. “They have been in existence for 20 years or so and Long Beach for about 50 years.”

Montenegro has been competing at a professional level for 49 years and has 11 sponsors,  earning over 18 national titles throughout his career. He began his archery career in the Philippines where he competed against Paguia’s father.

“June and my dad were competing archers in the Philippines, they used to do pranks on each other,” Paguia said. “When June moved back here to the valley, he started going to the local ranges and we connected back with him. He said, ‘Okay I want to be the coach and bring this team up’  and now because of him we almost have a field on campus.”

The majority of the club’s training over the last four months has been in Montenegro’s backyard, which he opened up to the club after practice at Woodley Park became overcrowded. The team is in the final stage of approval for an on-campus practice field.

With the exception of Paguia, who has been competing since high school, the California State Championship at Long Beach State in March was most of the members’ first competition.

“I kind of wanted to hide my stuff,” Gomez said about witnessing the top of the line equipment of his competitors. “We didn’t expect to place or anything.”

In the first round of the tournament, the competing members Gomez, Paguia, Adam Bernardino, Humberto Sanchez and Nathaniel Sanchez, shot 30 arrows per each distance: 40, 50, and 60 meters.

“Then, for the team round they had to shoot 70 meters, which they had only shot a couple of times when we could get into Woodley Park,” Montenegro said. “They didn’t even have a sight setting for it.”

The team was tied for bronze with Fullerton until freshman Nathaniel Sanchez recorded the winning shot.

Sanchez started taking classes in archery two years ago at Woodley Park after he saw people shooting while he was walking his dog around the park.

“I practice on Wednesdays and Saturdays because it’s the only time I can rent equipment,” Sanchez said. “I am working on buying my own so I can practice more often.”

The competing members have to share practice time on Saturday mornings with new members at Montenegro’s Granada Hills home. They don’t start their own training until the others have left.

“We worked really hard to finally got organized. We have to sacrifice because when we are training members to shoot, we don’t shoot because we have to take care of them,” Gomez said.

The scheduled practice time for new members is 10 a.m. to 12 p.m., but they never want to leave, Gomez said.

“Sometimes they shoot here till 9 p.m.,” Montenegro said. “When me and my wife have a date night we have to tell them, ‘Guys go home!’”

Montenegro is very strict on safety regulations and he doesn’t allow any fooling around with equipment, Sanchez said.

“He’s very dedicated in whatever he does. He’s very passionate. He puts a lot of passion into coaching,” Paguia said of Montenegro.

“I am very lucky to have these guys. They pushed and pushed to get organized and they have heart and dedication every day for practicing,” Montenegro said. “They have really good relationships. A band of archers.”

The teams hopes to be prepared for three tournaments this summer, including the State Archer of California in June and the California State Games in July.