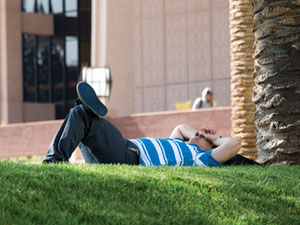 According to the most recent health assessment by the American College Health Association (ACHA), of the CSUN student body, 20.8 percent of Matadors claim sleep difficulties affect their academic performance.

The ACHA said these students who don’t get enough shuteye reported receiving lower grades in courses, exams and projects than they would have if they could get proper sleep.

With this in mind, debate has focused on healthy ways to get enough sleep. This debate has often focused on a specific question: To nap, or not to nap?

CSUN students cover the whole range of napping patterns, from no daytime naps at all, to scheduled napping every day of the week.

On the no napping end of the spectrum lie students who feel they cannot fit napping into their school and work schedule.

“I don’t nap at all,” said Janette Alvarez, 22, a senior business law major. “I have no time. I babysit a one-and-a-half year-old after class.”

On the opposite end of the spectrum lie students who said that napping is key to successfully completing tasks that school and work require.

“I nap about two hours every day,” said Faris Jaafar, 18, a sophomore business law major. “I get up early for school, so I go home after class and get more sleep.”

Then there are those students who lie somewhere in between, napping when they need the occasional burst of energy.

“I’ll nap sometimes, because on days when I have a lot of work I need to,” said Ali Alkaribani, 19, freshman accounting major. “I nap about an hour on those workdays.”

According to multiple sleep studies, naps can be beneficial.

The National Sleep Foundation said a short nap between 20 and 30 minutes has been shown to improve mood, alertness and performance during the day.

NASA reported that naps helped astronauts’ “working memory,” which is when a person focuses on one task but holds other tasks that need to performed in the back of their mind.

An example of working memory would be switching the radio station in the car, while knowing you still have to keep your foot on the gas pedal and steer the wheel at the same time.

The research journal “Sleep” found that a 10-minute nap was effective in increasing alertness for a short period of time, but that anything longer than 30 minutes may cause extended grogginess upon waking.

Many large employers have discovered the effectiveness of short naps in the workplace and have created designated napping areas for their workers.

One of these companies is ice cream company Ben & Jerry’s which initiated workplace napping about 10 years ago.

“It’s about a work-life balance,” said Liz Stewart, Ben & Jerry’s PR extraordinaire (a self-given title which all employees are encouraged to create). “Employees really appreciate working for an employer who cares about their wellbeing, and things like allowing napping allow them to give that much more back (to the company).”

Other companies that allow napping include Google, Nike, and the corporate offices of Pizza Hut.

While napping may help with short-term energy, most sleep researchers agree that a regular nighttime sleep schedule is best for high levels of energy and better work or study performance.

“Good sleep hygiene is key,” she said. “Avoiding naps, creating a relaxing sleep environment, and maintaining a regular sleep schedule are a few tips that could lead to a good night’s sleep according to the National Sleep Foundation.”

So thinking that a nap can fight off fatigue from an all-nighter cram session may be doing more harm than good.

A full night’s sleep in some comfy pajamas while snuggling a favorite teddy bear may be the best study technique of all. 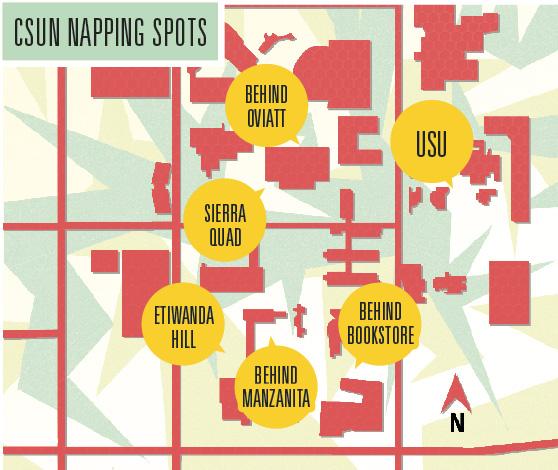 Sierra Quad: Try to stay in the middle area, to stay away from all the loud noises. This area is great for shade too. You can nap either on the stone platforms or steps or on the grassy area.

Etiwanda Hill: There’s a hill that can be easily found near W. University Drive (Etiwanda) and it’s a nice place to take a long nap. There is a lot of noise from passersby, but the downhill slope gives a nice view of the campus.

Behind the Oviatt: There are a lot of trees surrounding you, so shade is no problem. This space is right near by Arbor Grill, so you can hear some low background music.

Behind the bookstore: Over here is another small breezy, grassy hill, even though it’s not as big as the ones near the B2 and B3 parking structure. Second best spot to take a nap on this list.

ncomfortable, but you will see students resting on top with their school bags as pillows. This would make the top five places to nap.