Construction across campus continues despite budget cuts over the years 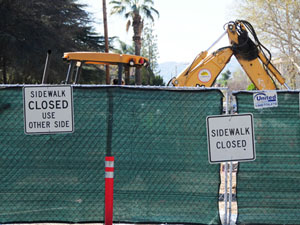 CLARIFICATION: The lead paragraph has been changed to reflect that bonds, donations and funds have helped with construction costs.

Construction across campus continues through the use of state funding, bonds and even donations despite deep budget cuts in recent years.

Colin Donahue, director of Facilities Planning, Design and Construction at CSUN, said the University has spent $850 million on several construction projects since 2002, with nearly $400 million of that spent on earthquake recovery.

Donahue said the construction budget is funded by state and non-state funding through the use of voter-approved bonds.

“That’s how a lot of the academic buildings are paid for,” he said. “If you look at some of the things we’ve done, like the renovations to Jacaranda Hall that were in the $12 million range and Chaparral Hall that was in the neighborhood of $15 million, those were paid for by a state general obligation fund, which is pretty standard for those kinds of academic buildings.”

An exception to the traditional academic building funding is the Valley Performing Arts Center, which Donahue said was mostly funded by a state obligation fund because it is primarily an academic facility. The other half was paid for through donor funding.

“In the case of any of those projects, they don’t have any impact on student tuition or fees because they are paid for from a different area,” he said. “The construction funding is not part of what we call the general fund or operating fee that the campus receives, it’s entirely separate.”

A third method of construction funding is the use of auxiliary or enterprise funds, which are paid for through local funds and financing plans.

“Parking is a great example of an auxiliary fund,” Donahue said. “In the time I’ve been here, since 2004, we’ve built the B5 parking structure, the B3 structure and then the G3 structure. If you tallied all those up that’s probably in the neighborhood of roughly 5,000 spaces of parking structure construction and it’s funded through the parking revenue the parking program receives and they pay for it. ”

Sharon Eichten, associate vice president at the Office of Budget Planning and Management at CSUN, said auxiliary or enterprise funds include housing, parking, the University Student Union and the University Corporation.

“Those are self-funded, if you will, and are not part of our state budget planning. They are truly, in the sense of the terminology, not state funding,” she said. “An auxiliary project is something like the Student Recreation Center (SRC), which was funded by bonds and the fee that was implemented and voted on by students a few years ago before construction began on that building.”

Eichten said before construction can begin on anything, a financial plan is created showing the amount of money on hand, how much will have to be given to the contractor over a certain amount of time, and the total cost of the budget.

“So when you look at projecting the cost and the ongoing maintenance of that new building or parking structure, that all gets factored in so you know exactly what the new fees are or how much the fee needs to be modified to cover that construction,” she said.

Donahue said the SRC is an example of something students pay for outside of tuition through a local fee. The fees are usually proposed by Associated Students and then voted on by students. The cost of the bond debt over the course of the life of the SRC is how the semester fee was determined.

David Crandall, general manager for A.S., said the SRC came from a referendum that was put before the students and was a project entirely funded by student fees.

“A.S. hasn’t proposed any new fees in the last five years,” Crandall said. “Around Spring 2009, the campus proposed and approved the Campus Quality Fee but the fee went through focus groups, not A.S., and the student fee advisory voted in favor of it.”

These auxiliary and enterprise funds do not in any way affect the overall campus budget because the revenue they generate are separate and are part of their own budget, Eichten said.

“What I’m talking about is the general fund, which is the money we get from the state of California, our state appropriations, plus the student tuition fees that students pay every semester,” she said. “So that’s revenue plus state appropriations that makes up our entire general fund budget and those other areas, auxiliaries and enterprises, don’t at all impact our campus budget. They stand alone.”

Eichten said that some get confused because of the construction that auxiliaries or enterprises are doing, yet there is not enough money for enough course sections.

“Hopefully that’s gotten better this year and will be better next year, but people get a little confused and think, ‘Well how are they able to build this new building and yet we don’t have enough money to support our classrooms?’” she said. “It truly is a separate fund, and they are earning that revenue separately from the campus general fund budget. They can’t be combined (and) we can’t bring money from housing or parking to supplement our general budget.”