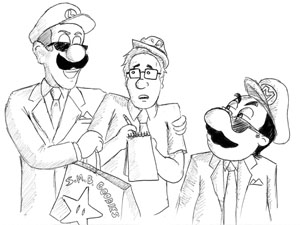 Video games and journalism. Two words seemingly diametrically opposed. They are at odds with each other and on the verge of being entirely incompatible. Oftentimes the word journalism isn’t even considered to be a serious phrase when talking about video games. Enthusiast press is more accepted and sputtered by the angrier fans of video games.

The guise of quality journalism is hidden behind the simple phrasing of news stories as rumors.  It happens all the time on major gaming blogs. This type of reporting does nothing to establish video game journalism as a meaningful outlet for quality news. It does a disservice to both media and readers.

The frenzied, frothing masses looking for the latest and greatest bit of news use this as chum to either proclaim the dominance of their favored brand or they use the resulting truths tied to the rumors to dismiss a media outlet as incoherent or trafficking in speculation and grab-assing with the very institutions they should be covering neutrally.

Part of the problem lies in the relationship between games media and the PR firms tasked with getting their games recognition by the masses beyond the generally fervent fan-base of extreme gamers. Grotesque amounts of schwag and trips and dinners and drinks pervade games journalism. It’s reminiscent of early radio days and payola. Basically bribing outlets and reporters with ad revenue and swank trips for the reporters so the coverage they need is there. With so much money tied to major game releases there is too much temptation to take the easy way and buy favoritism. Even if a reporter is truly objective after the barrage of stuff they get, the readers still question the veracity of the coverage they are getting.

Even worse is the metrics assigned to video game review scores. Metacritic is a website devoted to aggregating these scores and often the game makers tie bonuses and monetary value to an average score for a game. The push to have their game score high enough for bonuses to be paid out ends up resulting in cloudy interactions with the press.

Each journalist is responsible for their own barrier of what constitutes right and wrong when interacting with publishers and they have a responsibility to let their readers know what they consider to be okay. Some see no problem with accepting a drink from PR reps who they are also friendly with. Often this occurs in a very casual environment out of the realm of work, but perception is key. If a reader doesn’t trust a reporter, despite the innocence of those types of interactions, then they’ve broken their relationship with th readers.

As a journalism student taking PR courses to fulfill requirements it was interesting to see professors espouse the supposed need for us to accept that public relations is a way of life. We were told that we needed reps from those types of firms to get our story content ready. Maybe the problem lies in the basic education we are getting. We are basically told to accept the fact that we need access and to get that access we better play along.

Major media outlets have been penalized for not doing just that. A few years ago, Gamespot, one of the largest websites devoted to gaming news, folded to pressure from a publisher. Gamespot was running large banner ads all across their website for a game, Kane and Lynch. The reviews editor for Gamespot, Jeff Gerstmann, gave a less than stellar review and the publisher of the game, Eidos Interactive, apparently pressured Gamespot into firing him. Subsequently, a large group of the editorial staff quit Gamespot. It was the right move and due to this, they’ve thrived after that incident, as readers were able to see that they had integrity.

All too often it’s easier to just regurgitate a press release. Investigative journalism takes a back seat to clicks on sites and stories that barely exist as anything but trite, apathetic, blog posts.

The problem is double-sided as well. Less than stellar journalists inhabit the side of the media, and inadequately educated readers occupy the other side. A large group of people in general have no media training outside of what they consume. They never learn the process of properly vetting information and pursuing due diligence so when it’s presented it reads as true and accurate as possible.

Our senses are constantly exposed to media and advertising. We eat, sleep, and breath the stuff. The result is a populace that has no idea how to interpret and decode what they are consuming. They are distrustful of what is presented and instead of expanding their horizons, they turn to news sources that are comforting. A consumer of media has a responsibility to remain objective as well otherwise they perpetuate the problems.

I know it’s easy to dismiss this as a non-issue, because really, it’s just video games, but these problems exist in all forms of news and reporting. We’ve broken the process of gathering and disseminating information. It needs fixing and both sides need to work towards repairing that relationship.