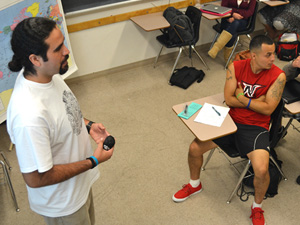 For students enrolled as mentors in the CSUN sociology department’s MOSAIC program, the classroom is just one small part of a much larger whole.

The “Mentoring to Overcome Struggles and Inspire Courage” internship offers college students a chance to put their book smarts to good use in the real world. Students work with at-risk children at four alternative high schools in the San Fernando Valley, helping them stay in school and find creative outlets for their talents.

The kids MOSAIC targets are the ones other people have given up on, said program director Alex Ojeda. They’ve had to leave their traditional high schools because of expulsions or other problems. Most of them have been told they are beyond help, their lives will amount to nothing and there is no point in spending anymore time or resources on them.

“We train our mentors here at CSUN to work with students in a way that not only challenges them academically, but also allows them to expand their artistic side through graffiti, through music and through poetry,” Ojeda said.

Through the internship programs, CSUN students work with teens in different areas. They help with studying and school work. They explore talents and interests, putting together poetry slams and art shows. They listen to their concerns or questions about drugs, sex, or problems at home.

“A lot of the adults in their lives have already given up on them,” Ojeda said. “So, that’s something they need very much, more attention from adults who can also serve as positive role models. The MOSAIC mentors from CSUN are there to try and fill that void.”

Despite the positive impact MOSAIC has had on both the students and their mentors, the program was in danger of shutting down permanently a few years ago.

After the presidential election in 2008, the administration shifted its focus for educational grant money, supporting science and math programs. The sociology department’s mentoring program no longer qualified and lost their funding.

Ojeda was approached to take control in the wake of this financial crisis. As a past mentor, he knew the kind of positive impact MOSAIC could have. He convinced the high schools to set aside money in support of the program. The paid internships were now unpaid and some activities had to be cut, but MOSAIC lives on.

On March 19, a group of high school students from the program came to CSUN for a field trip. The goal was to get them thinking about going to college.

They got a tour of the campus and also attended workshops organized by the Gamma Alpha Omega sorority as part of their “Emeralds For Education” initiative.

Stephany Moreno, a Gamma Alpha Omega member and past MOSAIC mentor, said the kids seemed really interested in information about the different clubs on campus and getting involved as CSUN students.

Maxine Amondo was enrolled as a mentor for a semester and has come back as a volunteer.

“A lot of these kids, no one in their family has ever gone to college,” she said. “They don’t have the opportunities other kids have. There are no college counselors telling them they can do this.”

One of her kids, Kathy Rodriguez, 17, is a junior at one of the continuation high schools in the valley.

Before she began the program, Rodriguez had no real plans after graduation. None of her older siblings had continued their education and she wasn’t doing well in her classes.

After working with Amondo as her mentor, Rodriguez has plans. Lots and lots of plans.

“I either want to be an immigration lawyer, an engineer or join the LAPD,” she said.

Other high school students who have had MOSAIC mentors are also hopeful about their future.

When he first began, Alejos didn’t think he would even graduate high school. But his mentor pushed him to achieve his goals.

“He said, ‘I’m not leaving your side until we do this’,” Alejos said.

Since his mentor wasn’t a teacher or parent, Alejos said he felt like he could relate to him. Now, Alejos is not only preparing for his high school graduation, but he plans to join the Los Angeles Fire Department (LAFD). While he waits for a spot on the LAFD’s Explorer program’s waiting list, he plans to work on an associate’s degree at a local community college.

By the end of the field trip, the high school students had heard guest speakers, gone to four workshops and gotten an idea of what life might be like as a college student.

Most importantly, they got the idea that they could achieve much more than anyone, maybe even themselves, had given them credit for.