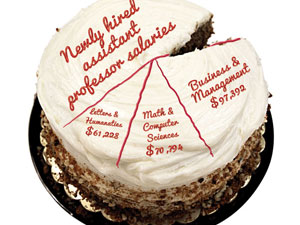 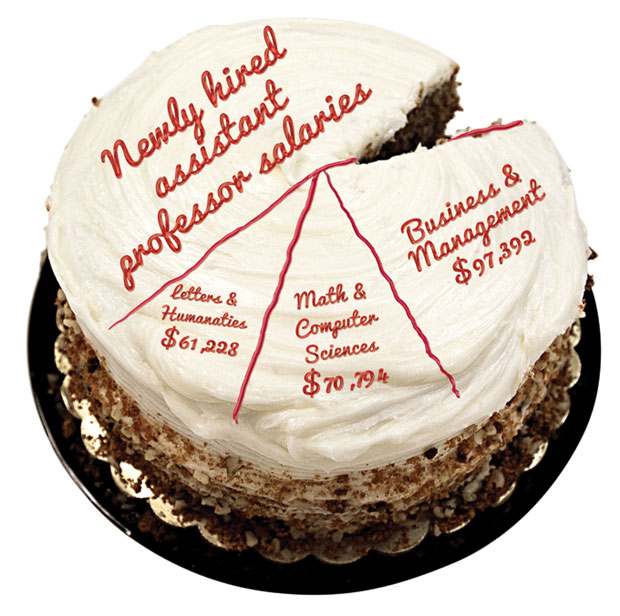 Financial discrepancies persist as professors in different academic departments are not paid equally, even if they hold the same position, according to the Human Resources department of the California State University system.

In the HR department’s most recent Faculty Recruitment and Retention Survey encompassing Fall 2011 faculty statistics, newly hired assistant professors in the business/management disciplines were the most highly paid.

Judith Hennessey, interim dean of the College of Business and Economics, said the high salary for new assistant professors in business and management is due in large part to having to provide incentives for people experienced in these in high-demand fields come to CSUN.

“We have a very, very tough time competing for employees in the talent pool of candidates,” Hennessey said. “While the salary offering is higher than other academic areas, we’re still well below what other educational institutions offer new Ph. D. level employees.”

Hennessey said qualified individuals with experience in the industry and Ph.D.’s are important to be sure that the degrees of students who graduate in business are respected.

“Do you either try to get quality (new hires) as older employees retire, or do you not hire qualified people, without which you don’t get accredited?” she said. “There are very many companies that won’t hire students that don’t come from a program that’s accredited.”

Elizabeth Say, dean of the College of Humanities, said that lower salaries in the humanities department is not a phenomena unique to CSUN.

“I think that’s a national issue, and not just a CSU issue,” Say said. “It probably has something to do with supply and demand things.”

Say said that people who earn degrees in humanities disciplines might be in less demand by private corporations than their counterparts in fields outside the department, resulting in lower salary offerings.

“If you’re a physicist, you have a bigger market in job offerings in private corporations and in higher education,” Say said.

Say said this discrepancy in salary does not affect work performance within the College of Humanities.

“Within a department or discipline, the provost and dean would look at (the new employee’s rank) at time of hire, education, and prior experience,” Jennings said. “Also, the department/college budget.”

The range of compensation that is able to be considered for a new faculty member is set by the faculty contract negotiated by the California Faculty Association.

For example, an assistant professor at CSUN who teaches during the academic year must make a minimum of $49,716 a year, with a maximum of $111,504.

Large disparities in income for the same work label are seen in administration as well as academic faculty appointments.

For example, people in positions that Human Resources calls Administrator IV positions see a salary range of $150,000 to $225,000.

The Collective Bargaining Agreement between the CSU system and the California Faculty Association describes an administrator as an employee who serves in a position designated as management of supervisory.

The different labels for administrators on campus are designated with numerals I through IV and signify different types of job responsibilities.

Titles in the Administrator I category include the director of audience services at the VPAC, assistant directors in admissions, and associate budget analysts.

Administrator II positions include the director of marketing and communications for the Tseng College, and the associate director of student housing and conference services.

“There is overlap within the administrators’ salary ranges to accommodate varying degrees of technical specialties as well as organizational structure/design,” Smith said. “For example, an experienced Administrator I in a highly specialized field may have a higher salary than an Administrator II with a broader scope of responsibility, but working in a less technical field.”

Smith said the factors in determining administrator salaries are like those used to come up with professors’ salaries.

“We look at the qualifications, the experience, and the role they will be serving at the university,” Smith said. “We try to maintain equity and compare to other educational institutions.”

Despite the comparatively larger salaries Administrator IV positions see over other positions, there has not been a pay increase for these positions in the past few years.

“Administrators haven’t received an increase in salary for the last five years,” Smith said. “There has not been money for pay increases. It’s a difficult time. People have been expanding their roles (to compensate for a lack of funding).”