America can only achieve true freedom through anarchy 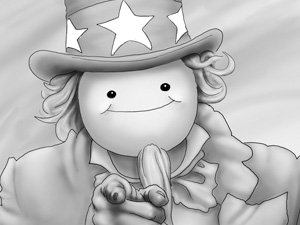 Congress’ approval rating with the American people is at an all-time low and something terrible has happened; New Zealand’s markets and society are considered freer than the United States. Why? How? That puny ass country off the coast of Australia? Those Kiwis don’t even have an army! That got me thinking about the problems facing the United States and how we can make a solid comeback to become the beacon of freedom that we once were. We have to get more extreme than the Paul Ryan budget and the Libertarians’ fiscal ideals. We have to make Ron Paul break down in tears of joy because of how much freedom we’re generating. If we’re going to out-freedomize those in New Zealand; we have to get rid of all government. All of it.

There are so many problems that the government can’t seem to fix that would finally go away if we eliminated the American government. With the simple signing of one final bill disassembling all government, President Obama can make America the very symbol of freedom. Without laws or government, the American people will finally be able to live in the purest free society. It’s like freedom on steroids, which coincidentally, will now be legal.

No need to worry about gun legislation, there’s no legislature! Finally Congress cannot be blamed for doing nothing. The school shooting issue will go away completely because without the government funding an education system, schools can’t even exist to be shot.

In fact every problem will eventually go away. Traffic tickets and those horrible people at the IRS will magically become a fevered nightmare. Even the DMV will disappear. If you know how to drive you don’t need any stinking paperwork. Why sit in a car and prove to a simpleton government employee that you know what you’re doing? You’re an American dammit, and driving is in our DNA. I even believe it’s somewhere in the Constitution, although I’ve never really given it a proper reading to find out.

A lot of people are thinking by now “Hey Mihkel, what about things like a monetary system, police, and a basic society structure? How will we be able to provide an infrastructure to move around in society?” I respond to you cynics of America: Do you not trust Americans?

Sure we won’t have a monetary system, but we’ll have the greatest version of capitalism and it’s called trade and barter. Whether it’s a cheeseburger, corn, or gasoline for your car, we will finally get rid of those greedy banks and stockbrokers on Wall Street profiteering off of the sweat and hard work of the American worker. Finally farmers will be respected and able to charge fair prices without dividends and subsidies to worry about. If worse comes to worst, at least they won’t starve with all of that food they’ve produced.

No law enforcement doesn’t mean there won’t be any type of security. It simply means that every soldier and police officer is now a rent-a-cop. Those who can afford protection can procure it by paying them in food and other products. Those who can afford the cops are obviously the ones worth protecting. If you can’t afford it when you call 9-1-1, sucks to be you. This is America and you should have worked harder by pulling yourself up by the bootstraps.

A basic societal structure will be provided for those who can afford to fix roads and bridges. No longer will we unnecessarily repave roads that still have any trace of gravel on it. You can pay for the roads you use most often and to hell with all the other ones. I’ve never driven on the I-87 in New York. Why should I have to pay for it?

Only the best teachers will get work from those who can afford it. Those teachers will end up teaching the rich kids who can pay for education. Everyone knows they are the best kids because they have parents who care enough to provide things like proper schooling. Some of you selfish people out there will say “But what about my kids?” Hey pal, I’m sick and tired of carrying your family’s weight around. Work harder! Why should I have to pay for your kid’s education? I don’t have any kids.

It’s true that there will be no laws, but why do we need laws? Criminals never follow the laws, so why even bother? Everyone will be in charge of carrying out justice with no courts to judge innocence from guilt. Everyone will have a gun so in theory no one will ever shoot anyone in fear of someone else shooting them in retaliation. Compared to other countries, we’ll have the lowest crime rates since we’ll no longer have laws, so no crimes are ever technically committed.

There will be some upsides for leftists as well. For all those beatnik hippie anti-war people out there, you will no longer have to worry about funding wars since we won’t. Liberals won’t have to worry about their money going towards a death penalty that they vehemently oppose. This country will no longer lock up addicts as criminals. Silly social problems that currently cost millions of dollars in resources such as gay marriage and prostitution will no longer be an issue. You can do what you want with whom you want. There is even some good news for capitalists because without regulations, you can finally run your company the polluted way that you have always dreamed about and still do anyways, so I guess the benefits won’t really matter to you.

People will envy our freedom. Our unrestricted free markets and perfect society of no crime. They’ll come to America as a land of opportunity and out of their countries of rules and regulations that act like a super nanny, shaking the finger and telling them what to do like children. Finally we’ll be able to look those New Zealanders in the face and wave our flag and sing our national anthem proudly and really mean it when we sing “O’er the land of the free and the home of the brave.”

-Mihkel Teemant is a writer and comedian that performs throughout L.A. He is also a journalism major at CSUN.