CSUN has its own unique identity 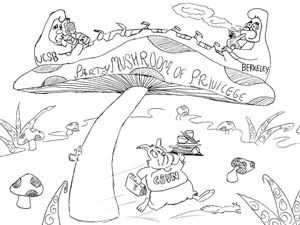 I took on a second job as a part-time bagger to make some extra cash over the 2012-‘13 winter break. Sitting on the for-sale pile of firewood outside the Ralphs in the NoHo Arts District I was on my lunch break, having a smoke as usual.

A 20-something-year-old Armenian guy walks up and asks if I have a lighter. As I hand him my mini green Bic, he asks what I do. I tell him that I’m studying journalism over at Cal State Northridge.

“Man, that’s such a sad place,” he said. If my memory serves me correctly, his name was Omar.

Is this guy seriously talking shit about my school? “I like it there,” I thought. Before I could conjure up any words to say after being blindsided by his statement, he went on about how he was recently there with a friend and thought it was a sad place. He asked me if I thought so, too.

He could probably tell by my deer-in-the-headlights facial expression that I wasn’t on the same page as him. He continued to analyze the problem talking about how nobody seemed to talk to each other with students walking from point A to point B heads down and oblivious to the world around them. His solution to fix the problem? Art. He thought we need more culture. The sad part is, I had no opinion about it. It’s just fucking CSUN.

He didn’t hate the school by any means, he just felt like it was missing something. I hadn’t put much thought into what makes this campus special before that conversation. Maybe it’s not even special. After all, it was my first choice and the only school I applied to. There were three factors at play:

This isn’t everyone’s reasoning for choosing Northridge, but nearly everyone I’ve met on campus has the same story. They just can’t afford living away from home or leaving their job. It’s the only viable option if they want a degree. Everyone hears that CSUN is a commuter school, and it’s comparable to shopping at Kmart— you’ll get durable clothes, but you better bet you won’t be turning heads.

Back in 2011, a few friends and I drove up to the Bay to catch a concert in San Francisco. My buddy Dylan who went to UC Berkeley let us crash at his home of Casa de Zimbabwe (CZ) — one of the many student housing co-ops part of the Berkeley Housing Cooperative.

The balcony area that saw an overflow of cigarettes and surplus of bongs was engulfed in an Alice in Wonderland themed mural. The fully stocked industrial-sized kitchen put restaurants I’ve worked at to shame. Even the hospitality was surreal– we were greeted with open arms by the 160+ residents, along with tons of beer, our pick of illicit substances, and all the fajitas we could eat and billiards we could play.

At first, Berkeley seemed like a cluster of neo-hippie stoners. Regardless of how kind everyone seemed to be, I couldn’t fathom how it stood as a top-ranked university and Stanford’s top competition. But the UC Berkeley students I met throughout that weekend— in the co-op, the bars and the streets— had a sense of community that I had never before experienced. They were all open minded, politically present, ambitious and artistic souls. It was unlike anything I had experienced in my community college days, unlike anything I’ve experienced here at CSUN. I was in awe.

Cutting class the Friday morning before springbreak officially started, I was Santa Barbara bound by noon. If you’ve heard it’s a party school, you don’t know the start of it— Del Playa, the street overlooking the beach in Isla Vista (the infamous college town of UCSB) is the hub of all things party for UCSB students and beyond.

By 5 p.m. every balcony housed a DJ, every backyard saw a keggar and there were more nip slips than pairs of tits. One yard had a mini-ramp in which skaters would drop in from a beat-up lifeguard tower, there were dance parties in most every living-room and the streets were flooded with inebriated college kids in board shorts and bikinis.

That was apparently only the warm up for the following day’s Deltopia, the block-party that saw over 15,000 party-goers, 23 arrests, 71 citations, 44 hospitalizations and over 440 calls to law enforcement.

CSUN could never and would never see a party remotely comparable to that. If anyone tried hosting a party of that magnitude in student housing it would be shut down by noon.

Though visiting was a blast, I could never go to a school where the norm is to drink yourself stupid and multiple girls introduce themselves by saying “Hi, I don’t have herpes!”— yes, that really happened. Higher education is supposed to be just that— education. And it’s hard to learn a thing when the place you should be studying in is being shaken by thumping bass from 2 p.m. to 2 a.m.

CSUN may have a non-existent party scene like UCSB, it may not have diverse student housing cooperatives or the prestige of UC Berkeley. It may have no strong culture to identify with and it might have no definitive identity in the scope of UCs and CSUs other than “that commuter school,” but that’s fine. I wanted an education, and I took what I could get. Being able to drive 30 minutes to school every day from the stability of my mom’s house is exactly what I need. CSUN is the only university that offered me the luxury of not having to turn my world upside down to get a degree. Maybe we lose out on a definitive identity,  but I’m okay with that.