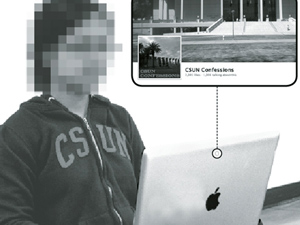 Revealing secrets and shenanigans to an audience is not always easy to do. But with the help of Facebook and Survey Monkey, sharing all sorts of scandalous information can become addicting.

In just a matter of about four and a half months, CSUN Confessions, a Facebook page allowing CSUN students to anonymously admit whatever they’d like, has garnered more than 1,600 confessions and more than 2,200 likes.

“I think the page is entertaining. Some of (the confessions sound) so ridiculous that it’s unbelievable,” said Katherine Dao, 19, a biology major.

Dao learned about the page through friends and decided to take a look. She said she checks the page every once in awhile when she’s bored, but hasn’t liked it so posts don’t flood her newsfeed.

The popular page is not unique to the university. Other universities, including UCLA, Cal Poly Pomona and UC Santa Cruz, have confession pages for their respective institutions that receive attention as well.

So what is it that makes this social media-based confession forum appealing?

Just like a cloak of invisibility, there’s something attractive about hiding behind an anonymous identity.

For Ryan Wilson, 19, a music industry studies major, the anonymity aspect of CSUN Confessions has positive and negative consequences.

“A few things I like about the page is that people can freely say what they truly think and feel without fear of judgment and or harassment from their peers and ask for help or advice without having to reveal who they are,” he said. “But sadly with anonymity comes trolls and jerks who ruin the fun and idea of the page.”

When one is anonymous, two things happen at the same time, said Abraham Rutchick, professor of psychology at CSUN.

“One is the loss of who you are normally, or your standard everyday self. And the second piece is the adoption of a different identity, if you want,” Rutchick said.

Many posts on the page are not actual confessions, but advice and statements of fact, most of which are racist and sexist in nature and are often negative. Others pertain to relationship woes, sexual encounters, thoughts, desires and people disliked in specific course sections.

Rutchick, who is an expert in social psychology, said he sometimes does an experiment in class where he asks his students what they would do if they were invisible for a day.

Responses largely include robbing banks, playing practical jokes on friends, spying on people and even inflicting pain on a former lover.

When individuals have an ability that they previously did not possess, he said people’s instinct is to engage in activities they could not do without it.

“I think we generally want credit for the good things we do, and don’t want blame for the bad things we do, so anonymity naturally tends to push us toward things that are less prosocial,” he said.

While the identities of those who make confessions on the page are unknown, users who post comments are not. Rutchick said it appears that comments made are not as severe as the anonymous confessions.

Because commenters are identifiable through their Facebook profiles, they are publicly accountable for what they say.

This fact, however, has not deterred too many people from responding to posts.

“I comment on these posts to show people that I am honest and open about my opinions. I am not afraid to show people what is on my mind, instead of anonymously posting on the page,” said Varderes Barsegyan, 20, a physics major.

Confessions are part of Western society

Anonymity is not the only alluring aspect of the idea behind college confessions pages.

Gina Giotta, professor of communications at CSUN, said confessions are at the heart of Western society.

Giotta’s areas of research include the social, technological and cultural life of media artifacts, and new media. This semester she teaches communication and technology.

Confessions have been transformed into entertainment for the American public, Giotta said, and this can be seen in the popularity of reality TV.

“There’s a strong interest in telling those secrets. Otherwise there wouldn’t be so many reality stars out there clamoring to tell you about their sex lives and those sorts of things,” she said.

“It makes us feel better and it makes sense that we seek pages like this,” Giotta said.

Some find the page also serves as a way for individuals to express themselves.

“Personally I feel (CSUN Confessions is) a good outlet for people to voice their true thoughts and feelings,” Wilson said.

While the desire to confess is not new, the ways in which individuals can admit secrets has evolved.

To make an anonymous confession, users click on a link posted on the Facebook page and are then directed to a form on Survey Monkey. There, people can type up what they would like to confess, submit it and see it on the page some time afterward. No names are attached to the posts, but each confession is numbered, reflecting how many have been made so far.

Despite the fact that confessions are deemed anonymous, Giotta offered a piece of advice to people using the page:

“If you think that you’re anonymous online, think again,” she said.

While names are not attached to confessions, Giotta said there are ways to figure out who people are online.

“There are certain identifying features that identify not only your computer but the network that you’re on. So if somebody’s savvy enough and really wants to find out who you are, there are ways that they can do it,” she said.

Submitting a confession through Survey Monkey does not guarantee anonymity, according to Giotta.

“The Internet is a giant copy machine that doesn’t forget and … the means by which people can figure out your identity online are fast and oftentimes unknowable to non-tech people,” she said.