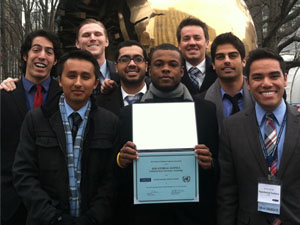 “We all were able to experience the culture of New York City,” said Steven Zavala, 21, a senior communications major and head delegate of the club. “Some of our members have not been out of California.”

At the conference the delegates (students) model what the United Nations does and research and learn about their assigned country’s position on particular subjects, draft laws and collaborate with delegates at other schools. CSUN was assigned the African country, Equatorial Guinea.

The students also gave daily speeches and voted on which resolutions would be approved.

“We were able to sit in seats where leaders talk about relevant issues and work with students from Germany, Switzerland and Italy,” said Jesus Juvenal, 21, senior political science major and club delegate. “We were also able to participate in events most esteemed in the world and got to see the fruits of our labor honored, displayed and announced.”

The club was originally a Model United Nations course taught by political science professor Peter Kappas. Kappas left the program this semester due to personal reasons.

Professor Jennifer De Maio advised the students on the position papers this semester and will teach the course in the fall.

The team received $10,000 from Associated Students two weeks before the conference.

Zavala said members of the team appreciate A.S. for having faith in them and providing a significant amount of funds that made the trip possible.

The team had only four weeks to prepare this semester when they usually have months of preparation due to the course not being offered, yet they still won first place.

The papers focused on issues regarding women, disarmament, nonproliferation and arms control, impact of climate change on sustainable development and the United Nations and 21st century information governance.

“We had a week and the half to write our papers,” Zavala said. “Research-wise, that is a small amount of time.”

The entire team worked collectively to set everything up for the conference, but the head delegates led the team.

Zavala said it is important for students to participate in the conference, because it exposes them to issues currently existing in the world, enhances public speaking and research skills.