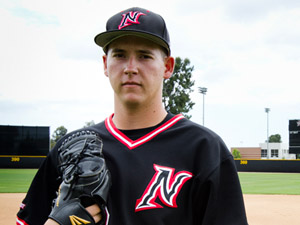 He steps up to the mound.

The velvet green grass, the blue sky, and the hot breeze. The crowd of fans, friends, and family begin chanting his name.

But he doesn’t allow any of that to distract him. He’s in “attack mode,” focusing on the task at hand. He grabs the ball, rotates his torso, and releases.

Since the age of 8, Jerry Keel, a sophomore majoring in sociology and pitcher for CSUN’s baseball team, has been perfecting his talents. He still remembers his father waking him up at 6 a.m. just to go to baseball practice. And at first Keel, now 19, admits he hated it.

“I just wanted to sleep,” Keel said. “But my dad would motivate me, keep pushing me. He would say ‘If you aren’t going to get up, I can just call and tell them you’re off the team.’ At that second, I’d jump right out of bed.”

His father wasn’t his only inspiration. Former Anaheim Angels Garret Anderson, a fellow left-handed pitcher and batter, also sparked his passion for the sport. Keel  would watch him play and learn his strategies from a very young age.

And all that motivation seemed to pay off. In addition to his achievements throughout the years, Keel was named the 2012 Big West Freshman Pitcher of the Year after compiling a 6-3 record with a 2.07 ERA.

“I was humbled,” Keel said. “I didn’t expect it at all going into the year, but I did my best.”

But baseball hasn’t always been easy for Keel. When he first joined the team, he had to go through rigorous conditioning. He weighed 280 pounds as a freshman and was required to drop down to 240 by his first semester on the team.

Keel’s overall consistency week in and week out is one of his greatest contributions to the team. Coming from Palmdale High School, Keel was already a good pitcher, but within a short amount of time he improved his physical fitness and delivery, being able to complete at the Division I level, said baseball head coach Matt Curtis.

“He provides a really good example for the rest of the guys on the pitching staff,” Curtis said. “Jerry is the type of guy that doesn’t get satisfied and is always looking for something else to improve on.”

According to Curtis, Keel easily matches up with opposing teams’ best pitchers. He has been devoting time to throwing a changeup and getting out of his comfort zone this fall, something that isn’t very easy to do with confidence when you’re the Freshman Pitcher of the Year, Curtis said.

Off the field, Keel is involved with a kids’ baseball camp where he coaches  and tutors young athletes, providing them with a promising role model.

Baseball isn’t Keel’s only passion, he took up sociology to pursue a career in criminal justice after taking an interest in investigative TV shows like CSI. Ultimately, he hopes to be a police officer as well as a being drafted as a professional player for the Angels.

“I want to thank all my teammates. They’re very supportive,” Keel said. “Good defense really helps a lot (in a game).”

Keel currently leads the Matadors with a 7-1 record and 2.06 ERA, which rank third and fifth respectively in the Big West Conference.