Grad school may not be for everyone 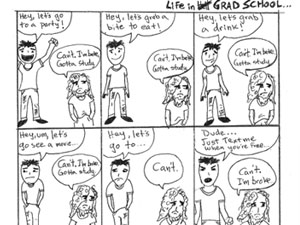 Some people call me crazy for entering graduate school immediately after completing my bachelor’s degree. Others say it’s a good thing because I’m getting ahead in life. Some even tell me it’s becoming a necessity nowadays.

As the job market and competition continue to grow and get tougher, obtaining a graduate degree seems more and more of a way to make yourself stand out to potential employers.
But is going back to school worth it?

As a 23-year-old who’s more than halfway through grad school, I will say this: choosing to pursue a master’s degree was both a wise choice and a poor decision at the same time.
I say this because of the timing of my choice, I opted out of taking a break after finishing my undergrad, causing me to burn-out right in the middle of my third semester.

Grad school is a good idea, but only if you’re 100 percent ready for the challenges that await. If you’re thinking of going after a master’s degree but aren’t sure if the time is right for you, be rest assured that it’s not. It has to be a firm commitment.

Don’t get me wrong, grad school is an absolute well of untapped knowledge designed to make one proficient in their field by providing in-depth understanding of relevant topics through advanced teaching methods.

In my three semesters as a mass communications grad student at CSUN, I can easily claim that I’ve learned more than I have in the entirety of my undergrad.
Not only do you gain knowledge, a master’s degree can lead to a higher salary. According to the US Census, the median salary for a person with a master’s is $78,541, about $10,000 more than that of a person who obtained a bachelor’s.

But all of this comes with a price, and I don’t just mean its high cost of tuition.
The week-to-week workload combined with the looming deadline of a massive (90+ pages) thesis is stressful. Knowing that your thesis is going to be meticulously looked at by a panel of super-smart professors adds to that. Being socially withdrawn becomes the norm — weekends and breaks are spent reading, studying and researching rather than going out with friends.   Some courses require complex books to be read and discussed each week, while others have challenging papers due at the end of each semester, most of them being 15 to 20 pages in length in APA style, a much different format than MLA, which we’re all used to.

Combine all that with the demanding coursework of senior-level undergraduate classes, which serve as elective units in in graduate school, and its a recipe that sounds daunting, especially if you hold more than one job.

Furthermore, graduate programs in California for in-state students cost $9,658 on average per semester (not including room and board), according to desigrad.com. Compared to the cost of a bachelor’s degree (CSU – $7,025 per year, UC – 13,200 per year, according to CaliforniaColleges.edu), it seems like a lot.
This may make money mighty tight for some, so students may have to skip out on luxuries they had before (unlimited texting, Netflix, going out to restaurants, etc). Worse, some students will have to take out big loans, putting them in debt as soon as they graduate.

All of this may sound difficult, but at the end of the day, it’s definitely doable.

However, since I’ve been in a school for 20 straight years, the compounding strain had proven too much, and I found myself longing for that much-needed break from school I craved when I first graduated. I had trouble keeping up with the intense pace, and my schoolwork took a backseat to my job. With my thesis scheduled to be due next semester, I began to think the task at hand was too overwhelming.

I worked out a timetable with my professor that works better for me on my quest to graduate, but if I had to give one word of advice throughout my time in grad school: don’t go into it right after finishing your bachelor’s unless you’re ready. Take some time off if you need, get in the real world, find yourself and then decide if the perks of a master’s degree are for you .