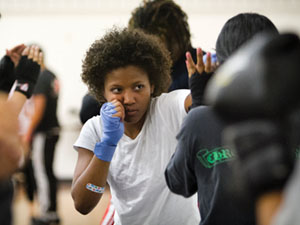 These combos are thrown furiously in the air as students warm up for the Matador Boxing team practice.

Meeting since 2007 after being founded by former CSUN student and present co-coach Peter Christianson, it offers a space for students interested in fitness through the art of boxing.

“There is a sense of community like a sorority or fraternity,” Christianson said. “But it is co-ed and more so a family unit centered around working out.”

Christianson said that he and his co-founders designed the club for students to work out and learn about boxing regardless of knowledge or skill level associated, as well as offer each other social support as teammates.

On any given night at practice, about 20 men and women run around the gym, do calisthenic exercises, work the basics and throw combinations in the air before attempting to spar.

Sophomore Tiffany Randle, a CTVA major specializing in media management, is one of the handful of women boxers. Randle said she was a bit bothered when she saw how few women there were when she first joined the club. But that feeling quickly dissipated after gaining ample acceptance, respect and support from the male boxers.

“When I first came in I was like, ‘Where are the girls?’” Randle said. “There are only two or three of us. But then I thought that it was awesome because the guys in here are like brothers so it’s family.”

A former cheerleader in high school, Randle said she keeps an active lifestyle and found boxing as a way to express her identity as a strong, confident woman, defying stereotypes about women being timid or weak.

“I’ve always been on the tough, strict side. I’ve never backed down,” Randle said. “Joining this club is a part of who I am. I would recommend other women to join the team, as long as you are motivated and forget about the social norm.”

Though the team would prefer a real ring to fight in, they make do with the simple soft blue mat on the ground, made for wrestling. Jaime, a co-coach and former student, said all students must learn the fundamentals, including footwork, breathing, keeping up one’s defense and delivering smooth punches, before getting in the ring.

“You’re not slipping properly, your gloves are too low, you’re not putting your punches smoothly enough, not breathing right,” said Jaime, describing the necessary criticisms he relays to the students to make them better fighters. “I try to give them very detailed instructions.”

Christianson and Jaime said that focusing on fundamentals is important to maintain a safe environment for participants of an intensive contact sport like boxing. They want their boxers to be able to continue boxing even after finishing their academics.

“A lot of facilities stress getting to that big picture of sparring and throwing combinations,” Christianson said. “We are on a college campus and it is a learning facility. I feel that it is very important  and beneficial to start from the basics and build up to the fancy combinations, so that way they can attain a skill that will last a lifetime and pass on to others.”

Though their attitudes are serious, the fighters train in a uniquely festive atmosphere. That is because they share a space with the CSUN salsa club, Salsa Libre, who stomp, swing and shout to the rhythm of salsa music on the other side of the room. It may seem rather distracting, but Jaime said he enjoys how the dancers’ upbeat presence adds to the mood of their training.

“We’re in here every Tuesday and Thursday night, sweating and working hard and so are they,” said Matt. “They’ve asked us a couple times to watch their routine, give them a spectator’s point of view [and] when we have fights, we let them know. Maybe we can both work on our footwork together.”