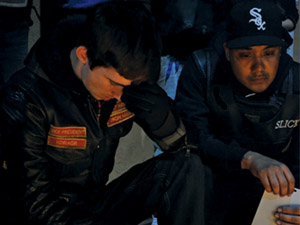 Wilkes graduated from CSUN in the spring of 2012 with a degree in Cinema and Television Arts in the multimedia option.

Wilkes was a sergeant in the United States Marine Corps and was sent overseas to serve two tours in Afghanistan. His most recent tour was in 2009.

Upon returning, Wilkes was very active in the CSUN and valley community. Not only was he looked to as a role model in the multimedia option, but he was also a member of the Phi Delta Theta fraternity.

Some of Wilkes’ pledge brothers, who are now a part of the Omega Phi Fraternity, said it was difficult to find a friendlier person than Wilkes.

“As intimidating as he looks, you would have difficulties finding anyone with a bigger heart,” they wrote on the Omega Phi Facebook page. “He has shown friendship and compassion to everyone that he has been in contact with and would not think twice about helping someone that is down.”

Wilkes’ friends outside the fraternity remember him for the positive and uplifting effect he had on those around him.

“He was full of life,” said Natalie Matosian, a senior psychology major. “He always had a smile on his face. It’s a shame people with so much life get taken away like this.”

Wilkes also was a member of Silent Natives, a motorcycle riding club.

Silent Natives held a candlelight vigil for Wilkes on May 1 at the intersection of Winnetka Avenue and Devonshire Street in Chatsworth where the accident occurred.

“Close to 300 people came,” said Boris Van Brunt, CSUN alumnus and fellow member of Silent Natives. “Groups of 80 motorcycles at a time came through. The vigil was first only going to be for Silent Natives members and family, (but) we had people coming from different states to pay respects to Jesse.”

Van Brunt agreed with Schaffer that Wilkes was always looking out for other people.

“His job (in Silent Natives) was to ensure our safety when we were in the group,” Van Brunt said. “He was a really good rider.”

The accident occurred at an intersection that had no traffic turn signal. A driver in a Honda Civic made a left-hand turn from Winnetka onto Devonshire, and Wilkes, traveling on Devonshire, hit the vehicle.

The accident has prompted Los Angeles City Council members to try to install traffic signals in the area.

According to Jessica Tarman, communications and media director of Councilmember Dennis Zine, the offices of Zine and Councilmember Mitchell Englander are working together to identify funding for placement of traffic signals.

A military funeral was held for Wilkes on May 4, at Oakwood Memorial Park.