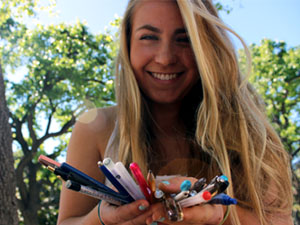 Many travel to Peru to stare in awe at the secret city of Machu Picchu, but when a middle school student from the United States went in 2006, she found her way to make a difference in the world.

Shelby Sinoway, 20, a marketing student at CSUN, founded a non-profit organization called The Power of Pens in August of 2006. The organization distributes writing utensils of any kind to developing countries where these are not easy to come by.

“I was in a village in the Andes Mountains and I gave a pen to a 6-year-old boy, but he started to eat it. Then I showed him my hand and I started to draw on it and I had like 30 kids fighting for the pen,” Sinoway said. “In that moment I realized that some people aren’t exposed to things that we take for granted every day.”

The purpose of the organization is to provide utensils that will help educate children and adults who don’t have an exposure to pens or pencils. The organization relies on donors, varying from companies to people, who can spare a pen. Any type of writing utensil in any condition is accepted.

“Learning starts with a pen and I want them to gain exposure to education. Someone may be brilliant in Africa and they are not able to write their thoughts because they don’t have a pen. That is why I want to give people the opportunity to express their thoughts that might be the next big thing, like the cure of cancer,” Sinoway said.

Some of the countries the organization distribute writing utensils to are Peru, Cambodia, Vietnam, Zambia, Botswana, Ghana, Uganda and Russia. It also does this for suburbs in the surrounding Los Angeles area.

In March, Sinoway said she sent pens to Ghana, and in April she sent some to South Africa. She has also given away pens to people in Israel and Egypt

Although there is no distribution system to deliver the pens and pencils, the organization relies on volunteers that travel to these countries as tourists to distribute the writing utensils.

“I find friends, religious groups or organizations that are traveling to other countries and they’ll take the pens with them. If I have a contact like an orphanage we deliver the pens to them,” Sinoway said. “There is no specifics of who receives our pens but I do try to give the resources to teachers or people that will give the pens to children.”

Although Sinoway is in charge of the organization, she said she is thankful to the Rotary International Organization, which has allowed her the chance to meet other people.

Sinoway vividly remembers her visit to Peru. Her desire to distribute pens began there but she found more than the beauty of the country. She found her passion.

Those interested in donating or obtaining further information on the organization can send an email to thepowerofpens@gmail.com.