Extreme poverty is a man-made problem 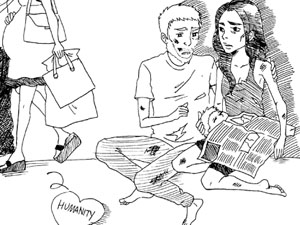 Today, you can buy and sell anything you can think of; both literally and figuratively. Technological advances in society have made it possible for the most absurd fantasy to become a reality. However, there is one priceless item that we seem to have lost, but that is never for sale: our humanity.

I know what you are thinking. “Not again with this humanity crap” or “it’s just a stupid cliché that I don’t want to hear right now.” Maybe it is. This mindset truly reflects the inhumane world we have created.

If our “creator” would actually witness our indifference and apathy towards each other and the home that was built for us, he/she would repudiate mankind with shame and disgust.

In today’s society, we tend to define ourselves through material and external forces. We buy new items in hope that it can fill an empty void in our lives. The new cell-phone, computer, clothes, shoes etc. becomes our extended ‘self’ that we hope others praise and envy. We rarely question the genesis of these items or who was oppressed in the production of them. Why should we?

As long as our needs and wants are satisfied, we simply do not care that other people have painfully died so we can walk comfortable in our new shoes and clothes all the while telling people on facebook what we have or wish to buy. Nor do we care that we have the privilege to rob other people from their human rights to breath and live on this earth. We simply don’t care because it is not us. But what if it was?

What if it was you who was forced to live on less than $1 a day, the same amount other people mindlessly spend on a bottled water or a pack of cheap gum. Imagine going to bed so hungry that sleeping becomes unbearable. Imagine that blood is more accessible than clean water or a toilet. Imagine seeing kids playing with guns and dead bodies instead of toys. Imagine that education is so out of reach that hope and aspiration is replaced with hopelessness and despair.

Now imagine yourself being a mother or a father who has children to feed and dress while still paying regular bills. You are forced to lose your dignity when asking your fellow human beings for help. All you want is anything to levitate your children’s pain, but humiliation is not enough for people who treat and perceive you as less than a damaged object. Defeated and stripped away from your humanity, your energy-less body has to now face your child’s tear-filled eye only to say goodbye. But perhaps death is a blessing; a quiet, slow escape when life feels nothing more than a different version of a man-made hell.

It is hard for us to even imagine this type of  life, but this is reality for more than one billion people or one sixth of the world’s population living in extreme poverty. As you finished reading this sentence, almost eight people have starved to death. Each day almost 30,000 children have lost their lives to hunger-related plights – one child every third seconds.Their bare feet and bones were simply too fragile to walk on this earth with the rest of us. Furthermore, every day over 4,000 children die from preventable diseases such as severe diarrhea as a result of poor sanitation and hygiene.

How can we proudly say that we sent a man to the moon, but still can’t find ways to feed and care for the most vulnerable citizens on our earth?

Now some will undoubtedly say, “I can not help that some people are too lazy to find a work” or “I didn’t cause poverty so why should I care?”

But as Mother Teresa once said, “it is a poverty to decide that a child must die so that you may live as you wish.”

The United States makes up only 5 percent of the world’s population, but consumes more than 20 percent of its energy. In fact, one American will use as many resources as “35 natives of India while consuming 53 times more goods and services than someone from China.”

Furthermore, according to a 2012 report by the National Resources Defense Council more than 40 percent of food in the United States is thrown away. This means that while Americans are “throwing out the equivalent of $165 billion each year,” our fellow human beings are scrambling to survive, scrambling to remain human.

Perhaps more mind-boggling is the fact that the world richest 300 people on earth have as much wealth as the poorest three billion. While our admired CEOs accumulate as much wealth as they desire, more than 200 million children between the ages of 5 and 14 in developing countries are forced to work in the most hazardous and callous conditions. The only reason we have developed countries is primarily because “third world countries” exists where exploitation of land and people feed our consumer need. But then again, as long as you and I get the right price for our Nike shoes or new ipod touch, the game is fair, making ignorance a bliss.

But we must realize that the one thing that connect us with the rest of the world is the fact that we are all from the same species so if one suffers, everyone does. Albert Einstein once said “the world not be destroyed by those who do evil, but by those who watch them without doing anything.” While poverty might not be caused by individual’s direct action, it is definitely prolonged by our indirect, imprudent actions.

It is imperative to remember that this is not about blaming individuals for their action or inaction. In contrast, this is about recognizing our footprints on this earth. It’s about showing gratefulness for what we do have while recognizing and being mindful of our privilege to have access to the most basic human necessities. It is about developing conscious of the world we live in, a world we must share with seven billion other human beings. In the end, we were born as human beings and we will be remembered and die as one.