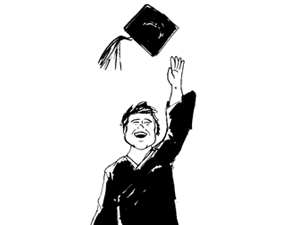 As the Beatles would say, it’s been a long and winding road. I first started on my path to a college degree back in 1998 as an incoming freshmen. That means the vast majority of you reading this who are also graduating were at the ripe old age of seven, give or take a few months. It’s a sobering thought but at the same time, I’m glad to be graduating with all of you.

Throughout my 15 years of on again/off again educational pursuits I’ve seen the highest highs and the lowest lows. Whether it was drinking and drugging my way out of college the first go-around to the eventual achievement of a degree, I’ve done and seen it all. So here’s a few things I learned along the way.

It’s true. Most often you’re taking junk course that seem as if they’ve been designed to haze you into academic submission, like some sort of learning chokehold. But there’s actually a positive benefit. They prepare you for those god-awful moments in life where you just have to suck it up and perform the painful task of generally worthless work. Jobs often call for projects that have no real bearing on healthy productivity. It’s just the way of employment. Those extra classes were the same sort of waste. But you did ‘em and you finished ‘em and now you can move, content in the knowledge that you beat them.

The Good Classes Were The Ones That Mattered

It can’t be said enough. The classes that engaged you were the ones that matter. Those few and far between moments of inspiration in a class you truly cared about exist as opportunities to dialogue with yourself and think about what made you drive to succeed. Don’t waste those feelings of accomplishment. Use them to set a path on what you enjoy. If you don’t enjoy what you are doing in school which basically equates to a job, then you know what you don’t want to do in the long run.

If you’re lucky at some point in your college career, you found some guidance and leadership from professors. Like the last bullet point, mentors can be few and far between, so keep what they told you at heart. Their encouragement is a great reminder that you’re doing what you want to. Their advice will stay with you and you’ll be a better person for it. Don’t forget them and what they’ve given you because if you’re lucky, someday, you’ll pass along their leadership to someone else.

The friends and yes, even colleagues, you met at school are invaluable in the next phase of your life. They will be there to support you and they’ll be assets in the process of networking. The cold truth about getting a job for most people is making a connection with your prospective employer. Oftentimes the simple fact that you grew up in the same area can sway an interview in your favor. If your friends give you access to the people who can hire you, then you have a strong foot in the door.

This one won’t work for everyone, but if you have any chance to, take it. Travel, write, hang-out, just do what you want. Most people will be scrambling for jobs which is okay too but some of you will be able to hold onto that personal freedom for a bit longer. In most circumstances, you won’t have these moments of freedom again. The normal world of responsibilities will start to gradually fall into place so make what you can in the next free moments if at all possible.

Embrace The Change Around You

You’ll never stop changing. It’s inevitable. Your worldview will adjust as you experience it more and you’ll change along with it. This is a good thing. Embrace it. Love it. Change is frightening and similarly freeing. The world’s about to get a whole lot bigger so jump into it and hold on because it really is amazingly fun once things get a little bit crazy.

You’re not alone on this. Oftentimes we pursue certain degrees out of a sense of responsibility or even because you aren’t sure what to major in. It’s normal to not know what to do next or if you even want to keep doing what you’ve been doing for the past few years. And no matter what anyone else says, you didn’t waste your degree if you decide to pursue something else. College is a chance to learn about yourself more than anything else so doubting your current course is absolutely normal. Most of us don’t really know, so take comfort in belonging.

That last thing I’ll leave you with, my fellow students and graduates, is a hearty congratulations. Really, it’s amazing that you did it. A college degree is a powerful thing. It shows faith in commitment and respect for academia and learning. Most of you are young and you have a lot to experience ahead of you so be happy and content that you pulled through this challenge. Make the world be what you want it to be and be sure to always try and have fun along the way.

-Nathan wanted to write some cynical shit but realized you all deserve better. Semper Fi.