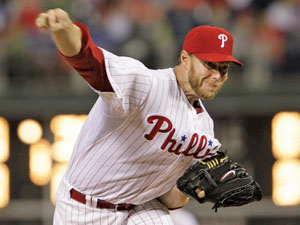 Philadelphia Phillies pitcher Roy Halladay’s career continues to decline after news came out Wednesday that he will have arthroscopic surgery to repair a bone spur, a frayed labrum and a partially torn rotator cup in his right shoulder.

The former two-time Cy Young winner will be sidelined for at least three months after surgery.

Halladay has been a shadow of himself for the last two years due to injuries sustained as a member of the Phillies that he never suffered in Toronto. Missing nearly two months in 2012 because of a strained back muscle, Halladay has struggled to be the ace of old, and it appears he may never return to form.

In seven games this season, he has pitched 34.1 innings, giving up 17 walks and nine home runs. His ERA of 8.65 is the second highest in the majors, and his 2-4 record is very un-acelike.

Halladay’s days as a dominant pitcher appear to be behind him as the velocity on his fastball has continued to drop and injuries have continued to plague the soon-to-be 36-year-old right-hander. As pitchers reach their thirties their velocity on their fastball begins to drop, needing to rely on pinpoint accuracy to combat their decline.

Needing to pinpoint pitches that were once able to throw hitters off may contribute to Halladay’s troubles as he seems to be trying too hard.

In his last two outings, he has pitched a combined six innings giving up a total of 17 runs. Pitching 2.1 innings against the bottom-dwelling Miami Marlins, he gave up nine earned runs against them.

Halladay has remained optimistic about his ability to return, stating the doctor told him that this surgery “could turn back the two or three years for me.”

Known as one of the hardest workers in baseball, Halladay’s rise back the pitcher’s mound could be possible, but in the twilight of his career it is unlikely. According to fangraphs.com, only a handful of pitchers over the age of 35 that went on the disabled list for shoulder issues have come back to pitch. They averaged 59 innings total for the rest of their careers.

There is no question that he work hard to get back to pitching in the majors this season again, but will he be same old “Doc” Halladay we were accustomed to seeing in 2011?

Set to become a free agent at the end of the season, how and if he comes back will have a big impact on his career, and his 2.1 inning effort against the Marlins may be the last time baseball fans see him on a mound.