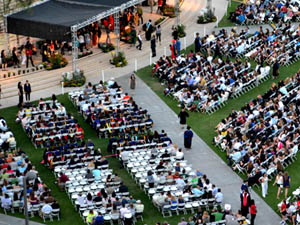 Faculty, staff, alumni, students and a CSU Board of Trustee member witnessed Harrison officially take her place as president after accumulating a year’s worth of experience in the position.

“The investiture ceremony is one of the oldest traditions in academia, signifying the ceremonial transfer of the symbols of the office, in this case the CSUN presidential medallion, and the pursuit of knowledge,” Harrison said in her presidential address. “Most typically it is done at the end of the person’s first year. And some experts have suggested電子ピアノ買取 that this timing of course is to make sure the person is suitable before doing the ceremony. So, I guess I passed one test.”

A bevy of supporters sat by the new president’s side and welcomed her to the university including A.S. President Sydni Powell, Faculty President Steven Stepanek and Vice Chair of the CSU Board of Trustees Lou Monville.

The CSU Board of Trustees appointed Harrison CSUN’s fifth president in 2012, replacing Dr. Jolene Koester who Harrison called “a dear friend.” Before delving into her own experience at CSUN, Harrison recognized the presidents that came before her.

“Because of their vision and their accomplishments I inherit a resilient, rebuilt and strong institution that is ready to move on,” Harrison said.

Harrison, who served as CSU Monterey Bay’s president since 2006, said that while listening to former president Koester at CSU president’s meetings she learned more about CSUN. She said those meetings were part of her process in coming to know that CSUN was the right choice for her.

“Well when I read the job description and then started learning more and more about the university, it’s diversity and the kinds of programs it offers. I knew from having listened to Jolene Koester for several years at our president’s meetings what a great institution it was and then when I was able to really do my own homework and learn more about it then I knew,” Harrison said.

In her address the new president focused on “unlocking potential and cultivating achievement” at the university by implementing initiatives brought to her attention by the campus community. Some of those initiatives focus on pedestrian and vehicular safety, enhancing matador pride and achieving a tobacco-free campus, something Harrison will tackle in the fall.

Anthropology professors Dr. James Snead and Dr. Matthew Des Lauriers were happy to hear the new president say that providing opportunities for students to participate in research was a priority at the institution.

“I like President Harrison’s priorities,” Snead said. “One of the things we’ll be doing is more involvement from students in research.”

Des Lauriers said that it’s important for students to have access to research opportunities because it will help students get hired.

“I like the research and the re-emphasis on research rather than seeing it as something in competition with teaching. It’s this hands-on applied experience that matters more than a GPA,” Des Lauriers said.

Senior art history and chemistry major Eleanor Wolgast, 21, works in the International and Exchange Student Center and attended the event to show support for the new president because she’s attended a lot of the center’s events as well.

“It was inspiring to hear someone talk about higher education and the hope she has for CSUN,” Wolgast said.