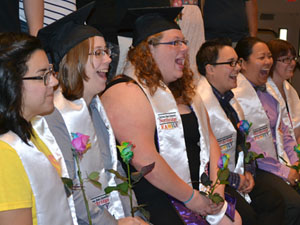 CSUN’s Rainbow Graduation brought the Lesbian, Gay, Bisexual, Transgender, Queer, and Allied (LGBTQA) community together Monday afternoon to celebrate academics and diversity.  Family, friends and faculty gathered at the Northridge Center in the University Student Union (USU) to support the 26 graduating seniors participating in the event.

John J. Duran, keynote speaker引越し 見積もり and mayor of West Hollywood, spoke about his experiences being a gay man and a LGBTQA advocate in the 1980’s. Duran is one of the few openly gay and HIV-positive elected officials in the United States and his education has played a pivotal role in shaping who he is today.

Psychology major Raieka Kianian said that Rainbow Graduation is intimate and personal to her.

“It’s small enough that you don’t get lost in the crowd and your friends and family can see you,” Kianian said.

This year’s student speaker was Karlee Johnson, journalism major and queer studies minor. Johnson spoke of their experiences in the queer studies program and mentioned the benefits of having the Pride Center, a queer resource center, here at CSUN.

Doug Riechel, creative writing major, said that the group of students participating in Rainbow graduation were people he already knew.

“These weren’t random folks that I happened to share an academic discipline with,” said Riechel. “They were people that I have had deep discussions and some rather awesome arguments with over the past five years.”