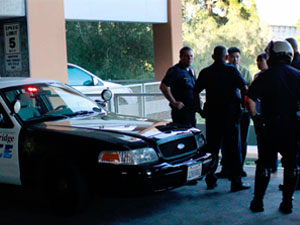 At approximately 5:30 p.m. yesterday a CSUN student allegedly overdosed on sleeping pills according to witnesses. The incident took place on the second floor of the B3 parking structure on the southeast side of campus.

The male student was examined at the location and rushed to Northridge Hospital Medical Center.

A witness stated that he noticed the male student asleep in a parked car next to his with all the windows down earlier in the day. The witness assumed he was resting and continued to head to his graduation ceremony. But when the witness returned he noticed that the student was still there.

Fire Department paramedics and CSUN police officers were called over.

Upon searching the vehicle, police found ashes inside the car, an empty bottle of sleeping pills, a long store receipt and a plastic bag.

Officers heard statements from the student’s family, and asked if anyone had access to his Facebook account. Assuming it was an attempted suicide police officers said that oftentimes people post comments online prior to these attempts.

It is unclear if the student was a graduating senior or took part in any of the commencement ceremonies of the day.

Witnesses and police refused to comment any further on the incident.