CSUN’s 2013 graduations come to a close 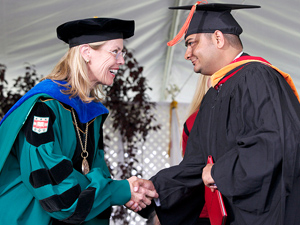 This week CSUN celebrated the academic accomplishments of nearly 10,000 students in more than 9 graduation ceremonies.

The graduation ceremonies began with the 31st annual Honor’s Convocation Monday, May 20. More than 2,000 graduates were recognized for their academic and extracurricular achievements. To be invited to participate in this ceremony, students had to maintain a cumulative grade point average of 3.88 or higher.

“The students we honor tonight represent the very best of Northridge,” she said. “You truly help make CSUN shine.”

The annual Black Graduation was held on May 20 as well. African-American graduates and their families filled the lawn behind Manzanita for the ceremony. More than 140 graduates, including 14 graduates receiving their masters, attended the event.

The College of Science and Mathematics, Health and Human Development and the Mike Curb College of Arts, Media, and Communication held their graduation ceremonies on May 21.

Graduating seniors and master students from the Mike Curb College of Arts, Media and Communication crossed the stage to obtain their respective degrees at 8 a.m. Graduating senior Anoushiravan Saboktakin was awarded the $10,000 Ravi K. and Amalia Sawhney Creative Excellence Award. This scholarship commemorated Saboktakin for his creative achievements and professional aptitude as a graduating senior.

President Harrison congratulated the mayor before addressing the graduates as a whole.

“I’ve heard your stories, and they are varied, and they are inspirational,” she said to students. “You have truly made CSUN shine.”

More than 500 students and their families gathered on the lawn behind Manzanita Hall at the College of Engineering and Computer Science’s commencement May 22.

CSUN alumnus Kunal Chitre, a software engineer for Digital Energy, addressed the Engineering and Computer Science graduates. Chitre congratulated the class on their achievements and the many sacrifices they have made to succeed.

“I can say this for definite certainty and personal experience: that trading those beach weather weekends for group studies, skipping movie nights to prepare for midterms and suffering through pages and pages of readings for that one question on your exam has paid off very well to this day,” Chitre said.

Rainbow Graduation, a commencement ceremony for the Lesbian, Gay, Bisexual, Transgender, Queer, and Ally (LGBTQA) graduates, took place May 20. The ceremony congratulated the 26 graduates participating in the event for their academic achievements and diversity.

John J. Duran, keynote speaker and mayor of West Hollywood, spoke about his experiences being a gay man and a LGBTQA advocate in the 1980’s. Duran is one of the few openly gay and HIV-positive elected officials in the United States and his education has played a pivotal role in shaping who he is today.

The College of Humanities, College of Business and Economics and the Michael D. Eisner College College of Education celebrated their commencement ceremonies on May 22 and May 23.