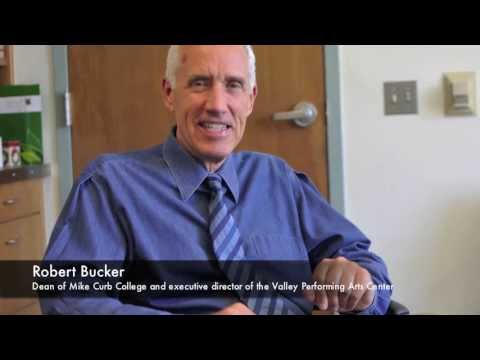 After six years of as the dean of Mike Curb College and three years as the executive director of the Valley Performing Arts Center (VPAC), Robert Bucker announced he will be leaving CSUN to become the dean of the College of the Arts in Portland State University, starting September 1, 2013.

“I am leaving CSUN in wonderful hands. I am certain that an interim executive director will be named at the Valley Performing Arts Center and an interim dean will be named here in the college,” Bucker said.

Under Bucker’s leadership, students were able to learn from the performances, exhibitions and lectures selected for the specific college.

Associate Dean Dan Hoskin said he recognized and valued the dean’s ability to support each of the six departments that compose the college as individual ones.

“The way the departments are run, the funding that is available to them and the programs they are able to create with the support [is] the primary way that the dean supported the students.” Hoskin said.

Bucker’s influence, however, reached beyond CSUN and into the community of the San Fernando Valley by playing an essential part in the establishment and growth of the VPAC.

After gaining experience as the director of the education department for the Metropolitan Opera-Metropolitan Opera Guild in New York City, Bucker used his knowledge to develop the programs of VPAC, which has featured award-winning artists such as pianist Lambert Orkis.

Even though Bucker will leave for Portland, he made sure the programming for the VPAC is set for the 2013-2014 academic year along with some bookings for years 2014-2015.

While CSUN will be searching for a newly appointed dean for the Mike Curb College and a new executive director for the VPAC, Portland State University expressed their delight to have Bucker as their new dean.

“I am pleased that we were able to attract a new dean that understands the important role that our College of the Arts plays at PSU and in our community,” said Sona Andrews, provost of PSU.

“Bob’s experience, comprehensive understanding, passion for the work, and proven leadership when coupled with the tremendous talents of our faculty, students and staff will continue to blaze a bright future for the college.”