Board of trustees and CSU workers far from a salary agreement 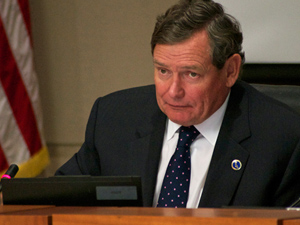 Union leaders for CSU employees decried the 1.2 percent salary increase proposed at the CSU board of trustee meeting in Long Beach.

“Our members need more than a 1.2 percent salary increase and they cannot afford to pay more for their health care,” said Mary Kay Stratham Doyle, president of the Academic Professionals of California.

CSU employees have not seen a pay raise since 2007 and while $38 million will be allocated for salary increases for all CSU employees, this may be offset by a proposed increase in health care contributions.

Vice Chancellor for Human Resources at California State University, Gail Brooks, said CSU is unique compared to other systems because as health care costs have risen over the years, the university has compensated for those costs.

“Therefore, the CSU will propose modest increases in the payment of the employee share of the health care premium for all employee plans,” said Brooks.

Political science professor Andy Field said the CSU is not only unique when it comes to health care benefits.

“We are also unique in that we don’t get step increases as the thousands and thousands of other employees in the state of California do,” said Field.

John Orr, a dispatcher at CSU Fullerton who also represents clerical workers, says the situation needs a long-term solution and the “modest” 1.2 percent or even 2 percent won’t solve the problem.

“Everyone is tired of hearing, we are going to have to do more with less. The patience is wearing because it’s just been so long,” said Harrison.

While Harrison acknowledges that the proposed salary increase is not enough, she does believe the CSU system is moving forward rather than backward. This new direction will affect people’s morale and what “they are willing to do and not do for students” and the campus as a whole.

Meanwhile, the board of trustees approved the five new CSU presidents salaries, but as Chancellor Timothy White emphasized, “there is no compensation increase for any of these presidencies.”

William Covino, the newly appointed president of Cal State Los Angeles will be paid $299,000 and all new presidents will get the usual monthly car allowance of $1,000 and reimbursement for their moving expenses.

During the meeting, an emotional presentation by parents who lost their son to binge drinking compelled the CSU board of trustees to adopt and further implement their alcohol prevention policies on all CSU campuses.

“Perhaps our action will be one more step forward to making his death and all it represents to so many other families a little bit less painful,” said White.

“Carson’s life ended there, but his legacy began there,” said Starkey.

After their son’s death, the Starkey’s started the non-profit organization, awareawakealive.org, which provides tools to educate and prevent alcohol poisoning while giving students “the confidence to seek help without getting into trouble.” The Starkey’s pointed out that every 44 hours, a college student dies of alcohol poisoning in this country.

“With your support and our free tools, all CSU students can be empowered to know the signs and do the right thing, save their friends’ lives,” said Starkey.

“Joy and I have maintained good friendships with many of Carson’s friends and have just recently celebrated graduation with them….Carson should have been there. The clock is ticking,” said Starkey.