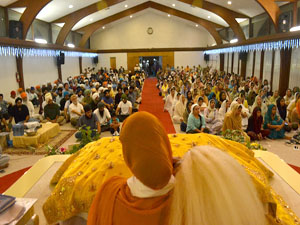 According to Sethi’s family, the 20-year-old interdisciplinary studies major was swimming alone when he called for help. His older brother Mandeep Sethi and other family members  pulled him out of the lake. They did CPR until Sethi was sent to Bear Valley Community Hospital, where he was later pronounced dead.

“Every student is special but Jusdeep was something else. He will definitely leave a void in people’s lives, but he will live on through us,” said Augie Garibay, activities coordinator for clubs and organizations at the Matador Involvement Center.

Sethi’s family held a memorial service at the Khalsa Care Foundation in Pacoima on Tuesday at 7 p.m.

“No special invitation was sent to anybody,” said Kuldib Singh, a family friend for over 20 years.

Singh walked into the Gurdwara or “the place of worship for Sikhs” and said that there were more than 400 people at Jusdeep’s memorial service.

“He had his ways to touch people’s souls,” said Singh.

According to Singh, Sethi’s mother was grateful for the time she had with her son. She also told Singh that God placed him on this earth and God could take him away whenever he desired to.

According to Sikh tradition, when a person passes on, their soul is not subject to death. The soul transcends and Sikhs celebrate the life that was lived. They do not focus on the sadness of the life that has passed, something Sethi’s brother Mandeep Sethi said he is learning to understand.

“In Sikhism we believe that after death the soul is transitioning into the universe,” said Mandeep. “He was a beacon of light and hope that even in this material world Jusdeep was able to maintain his purity and innocence and channel that through his words.”

Jusdeep was widely known by CSUN students and faculty and was held in high esteem as a student, friend and advocate for change.

“He was one of those people who was always humble and at the same time very committed to social justice. He was an admirable person,” said Danny Santana-Hernandez, 23, history graduate student.

Many of Sethi’s friends and family said he had passion for nourishing his environment. He aspired to become a naturopathic physician, meaning he wanted to use all-natural medicines and work with nature to heal people. Sethi wanted to start an all-natural medicine school and a free clinic.

“Jusdeep was really rooted in Mother Earth. He would work at the community garden both at CSUN and at the Sikh temple,” said Mandeep Sethi.

A funeral will be held for Jusdeep Singh Sethi at Forest Lawn Church of the Recessional in Glendale on Tuesday, August 20 from 10 a.m. to 12 p.m. Following the funeral will be a Langar, or reception, at the Khalsa Care Foundation in Pacoima at 1 p.m. and a Kirtan, the Sikh tradition of spiritual hymns at 2 p.m.