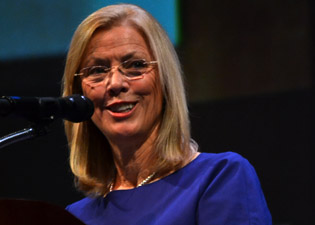 More than 800 people attended the celebration, filling the Great Hall to maximum capacity.

“[Harrison’s] speech was inspiring, motivating,” said Debra Hammond, executive director of the University Student Union. “It gave us a push toward the start of the year.”

During her speech Harrison encouraged faculty and alumni to offer their continued support to incoming freshmen and transfer students so that they can transition smoothly into college life.

This fall CSUN has admitted the largest group of incoming freshmen and transfer students in its history. The headcount for students enrolled totals more than 39,000.

This year Harrison’s primary focus is centered on the importance of CSUN’s external influence.

Since the president’s inaugural address last Aug. 23, 2012, CSUN has received praise and recognition from numerous institutions.

“I want CSUN to be the envy of institutions who also strive for success and diversity, because we do it better than anybody else,” said Harrison.

Harrison also mentioned that her vision for CSUN is to grow cohesively through the promotion of diversity and student health.

The president also stressed the importance of students ability to access information through technology. This semester students can download the free CSUN Mobile App to complete tasks such as adding classes and making payments. They will also be able to gain access to several software and file-sharing programs such at Microsoft Office, CSUN Box, Lynda and more at no cost.