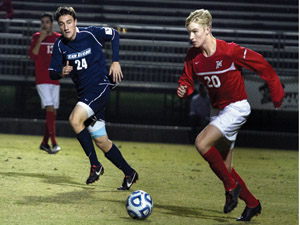 CSUN men’s soccer team returned its core group of players back from last year, with the hopes of making a lengthy run into the postseason. Last season Northridge won the newly-formed South Division and the Big West Tournament.

A 1-0 shutout win against UC Davis in the Big West championship secured a trip to the NCAA Tournament, the team’s first berth since 2005.

Despite an early exit in the NCAA Tournament, the Matadors recorded their best season since 2005. With 19 returning players, head coach Terry Davila has an optimistic outlook for this team.

“We want to represent Cal State Northridge in the manner that is expected of us,” Davila said. “That includes good quality playing, hard working players, and our student athletes doing well in the classroom.”

In his debut season at Northridge, Lev-Ari started every game and led the team with 15 goals and 30 points. He recorded both game-winning goals in the Big West Tournament and was named Tournament MVP, as well as the Disney Soccer/NSCAA National Player of the Week. He ended the season ranked sixth in the country in goals scored and led the conference with seven game-winning goals.

“My own expectations are to score double digits again this year,” Lev-Ari said. “The coaches recruited a lot of good players and put us all together. Now we’re like a family.”

Leading the Matadors and the conference in assists for the second straight season, Benavides was named as an All-Big West Conference Honorable Mention for his production. He finished fourth in scoring on the team and recorded 10 assists on the year.

“One of our biggest strengths is that we have almost our entire offense coming back,” Benavides said. “We have goal scorers, people that can produce, defend, go both ways, but the main thing is we can score a lot of goals.”

Returning junior forward Edwin Rivas is expected to contribute more following his breakout season in 2012. Rivas recorded eight goals and four assists, finishing second on the team with 20 points, and tied for third in the Big West in points, points per game, and goals.

Although the team tied the school’s Division I record for wins, Davila still feels like they can improve.

“We need to put all of our lines together, and make sure we’re connected from the back line, the midfield line, the forward line, and the goal line,” Davila said. “We have to be on the same page. We’re as weak as our weakest line and we’re as weak as the weakest player on that line, so everybody has to be held accountable for doing their area very well and performing their function within their line.”

Last season, the Matadors lost 2-1 in a double overtime thriller to UCSD in the first round of the NCAA Tournament and that loss still resonates with Benavides.

“For me any opponent is like any other, you have to respect them, but we really want to get back at UCSD for knocking us out of the playoffs,” Benavides said.