Women’s Soccer: Veteran Leadership is key for back to back Big West Titles 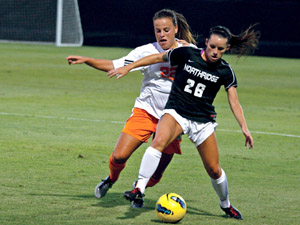 The women’s soccer team is looking forward to defending their Big West Championship this season.

The Matadors kick off the 2013 season against two Pac-12 opponents, Arizona State and UCLA, both on the road. UCLA is ranked fifth in the NSCAA/Adidas College Soccer Women’s Top 25 Poll.

The schedule does not lighten up any as the Matadors take on Texas Tech (24) on the road on Sept. 8, another top 25 ranked team, and their third Pac-12 opponent, Oregon State, four days later at home.

Senior defender and captain Chloe McDaniel thinks that the tough schedule is a good test for this young team.

“I’m glad we have just as hard a schedule as we’ve had the past four years,” McDaniel said. “Just because we’ve got 20 new players and a little bit less experience, I’m glad Keith (West) hasn’t let down in making the schedule.”

Head coach Keith West has plenty of confidence in his young team going into the season.

“We have a tough group. I love their attitudes,” West said. “We had a lot of experience last year and that’s a nice thing to have.”

The team was ranked fifth in the preseason coaches poll in the Big West Conference.

“We’ve been projected in that area probably the last five years,” West said. “It’s not a big deal to us. I don’t feel slighted at all. There are some good teams in our conference and they probably should be voted where they are.”

Although the team lost many seniors after last season, they believe that they have bounded together in a way where each player has complete trust in the next.

Senior midfielder and captain Haley Chee feels that the captains have the willpower to lead a young, inexperienced team.

“I think we all support each other through everything,” Chee said. “I think that’s what’s gonna get us through. We’re always there for each other.”

Even another title shot is not far from Chee’s expectations.

McDaniel believes veteran leadership is key to the Matadors having a successful and productive season.

“I think the older girls are really stepping up this year, especially the juniors and seniors are helping the freshman because there are 17 of them,” McDaniel said. “I think what needs to be the strongest attribute is the older girls stepping up and leading the younger group.”

The women Matadors won their first Big West Championship last year and made it to their first ever NCAA Tournament appearance. They are looking to repeat last year’s accomplishments but need new young players to step up into unfamiliar roles to replace nine graduating seniors.