CSUN officials anticipate a record 38,000 plus students to enroll this fall 2013 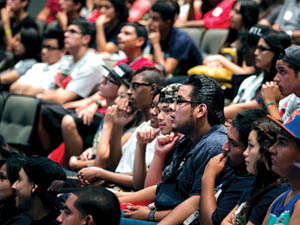 University officials are expecting record numbers for students enrolled at CSUN this fall. More than 38,000 students have been accepted to the university and about 10,000 are incoming freshmen and transfer students alone.

“We have more freshmen than we have ever had. We’re guessing 5,800 to 5,900,” said Elizabeth Adams, vice president of undergraduate affairs.

This brings the amount of students enrolled for the fall to more than 38,000. Though these statistics are only projections, Adams estimates that this will be the highest number of student enrollment in CSUN history. The real numbers will be available by the fifth week of school.

“I chose CSUN because they offer more classes, and I came for the diversity,” said Ijeoma Nnely, a freshman with an undecided major. “If you go to another university, it’s predominantly another race. But here, you see people everywhere, all shapes, sizes, and colors. That’s what stood out to me the most, the diversity.”

Enrollment was closed to incoming freshmen and transfer students Spring 2013. Adams said the closed enrollment may have contributed to the increase of students this semester.

“The transfer numbers were high so we closed Spring ’13 admission,” Adams said. “The students who would have come in the spring enter in the fall instead. Most of them apply for the following term that we’re open.”

“For some [departments], it will be a couple of years from now once students get through their general education,” Harrison said.

Every department on campus is hiring new faculty to accommodate the increase of students. Some departments are more impacted than others.

“The teacher-student ratio goes up in some places and not in others. We increased the size of the freshman writing classes this fall by two students,” Adams said. “There is a certain capacity that comes with the scale. We can accommodate more students if we add two students per class.”

President Harrison said the school received $125 million from the governor’s budget to accommodate the increase of students.

“We [also] got an additional $125 million for enrollment growth and $10 million for online stuff,” Harrison said.

As a result of the fall enrollment increase, school officials said Spring 2014 enrollment will be closed for all transfers, excluding few exceptions.

Demographic data from the CSUN Institutional Research website shows that most of the new students came from local areas in Los Angeles and Ventura County.

“Typically we know that if we have about 3,500 students total, 2,500 will be out of state or largely international,” Provost Hellenbrand said. “We will have that information within three weeks.”

More than 4,500 first time freshmen enrolled from Los Angeles County this semester and more than 200 came from Ventura County. The total enrollment for incoming freshmen is up by nearly 1,000 students from last year.

According to provost Harry Hellenbrand, vice president of Academic Affairs, high schools have had an impact on this semesters high enrollment as well. Hellenbrand said there are more students ready to attend college now.

“Most students are completing the a-g requirements in high school,” Hellenbrand said.

The a-g requirements are a list of required courses students are recommended to take in order to attend a UC or CSU after they graduate. The a-g requirements will ensure high school students have a general knowledge of math, English, history, science and language arts before attending college.

“People in general, teachers, administrators, everything  about this place has a positive vibe. It gives you the feeling that you can empower yourself  by being motivated by others,” Tosca said. “Currently I’m a freshmen. I’m going to be rooming [and] I’m coming out here to fully grasp the concept of what college life is.”