Joining the military to pay for college carries serious risks 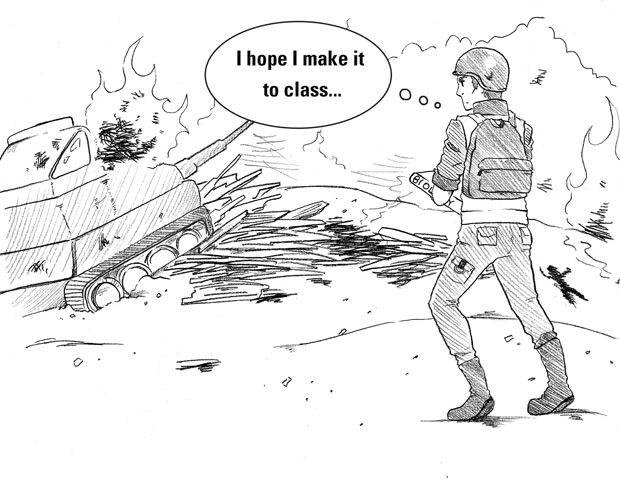 We are all aware, and some of us painfully so, that the economy has seen better days. Between that and the always-increasing cost of higher education, joining the military to utilize the GI Bill may be an option that’s growing more alluring.

However to further explore the benefits of the GI Bill, there are first some fundamental issues that need to be addressed. It seems it is not just this writer’s humble opinion, but rather a general consensus that joining the military for the sole purpose of GI Bill benefits is something strictly advised against.

That being said, if the GI Bill is going to be any sort of factor in someone’s decision to join the military, there are a couple of things they should know.  First, there are two GI Bills, but anyone joining now will be eligible for the Post 9/11 GI Bill.

The Post 9/11 GI Bill offers a lot more than the Montgomery GI Bill but may still be less than some expect. It covers everything and more if you’re going to a state school like CSUN, but there is indeed a cap for private schools.

There is a national maximum allotment of a little more than $19,000 a year for private or foreign schools, with the exception of a few states who offer a lower maximum amount (California is not one of these, and Michigan’s maximum is actually slightly higher).

To a CSUN student this may still seem incredibly generous, but to give some perspective, the average tuition for a private institution for the academic 2010-11 year was roughly $32,000 according to the National Center for Education Statistics. However, private institutions infamously offer many more scholarship opportunities, and that’s not including additional military scholarships.

The new GI Bill does help pay the bills though; it provides a monthly housing allowance (MHA) based on the college’s zip code and the number of days served on active duty. The MHA averages $1,368 but cannot exceed $2,700, according to militarybenefits.info.

Additionally, you get up to $1,000 for books allotted annually, proportionately based on the number of credits taken.

Let’s take a step back and consider who is actually eligible for these benefits.

The Post 9/11 GI Bill is available for any service member who has served on active duty for 90 or more days since Sept. 10, 2001. It is also available for those who have been honorably discharged or discharged with a service-connected disability after 30 days.

To clarify, active duty includes but is not equivalent to deployment. Exact statistics of deployment rates are unavailable to the public but the general consensus on this one is that you shouldn’t join the military thinking you will never be deployed.

The only other thing to really keep in mind with all of this information is that these benefits do indeed expire after 15 years following release from active duty, and only 36 months of benefits are covered. Essentially, a four-year degree is covered, and the MHA is only applicable to those students attending full-time.

This still seems incredibly generous to me, until you start to contemplate what joining the military actually entails. I am eternally grateful for all that our service members do, but as all of the above fits nicely on the pros side of a pros/cons list, we can’t ignore the cons.

Everyone is obviously different, and some people are simply more compatible for the military. Even in light of that, however, there are inevitable dangers everyone faces when joining the military, which directly affect their lives and therefore their schooling.

There has to be some sort of additional desire for a choice so drastic, and again, I’ve found many people echo that opinion.

The cons seem heavier, to me, but that is ultimately determined by each individual. Some of the cons that come to mind include the possibility of sexual harassment and rape, which have been recently reported. In addition to this, there is PTSD, lack of personal freedom, and death.

Besides the obvious cons listed above, there is a lot of general misunderstanding about certain aspects of joining the military. For instance, anyone joining the military is in it for at least eight years, albeit not all of that is served on active duty.

Rod Powers, retired Air Force 1st Sgt. with 22 years of active duty service, has written several books including Veterans Benefits for Dummies, and he runs a thorough About.com webpage in regards to common misunderstandings like the eight year minimum.

Essentially, the GI Bill is a good opportunity… for those who are fortunate enough to come out of their active duty healthy, sane and alive. I’m sure military recruiters help their possible recruits to bet on this likelihood, focusing on the benefits of the GI Bill and glazing over these validly serious concerns.