CSUN Tuesday Talks for LGBTQA community to resume this fall 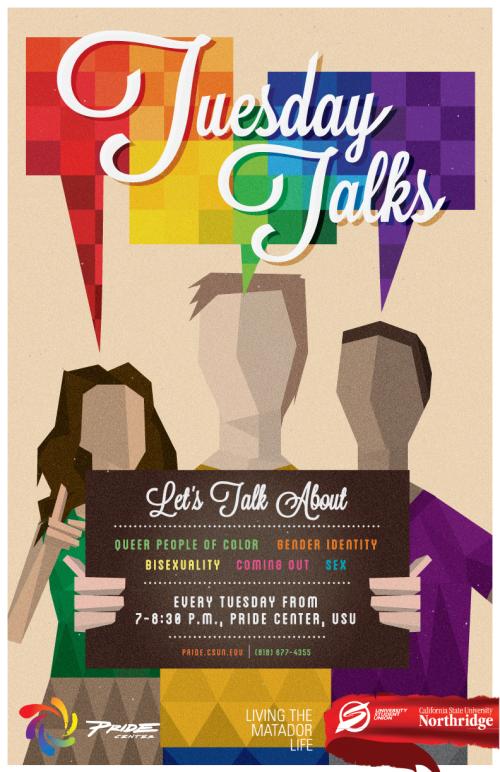 The Pride Center will continue to host their weekly Tuesday Talks this fall semester.

Tuesday Talks is an informal discussion group that allows students to chat about a variety of topics surrounding the Lesbian, Gay, Bisexual, Transgender, Questioning and Allied (LGBTQA) community.

Those who attend write down topics on an index card and drop them into a bowl where they are randomly fished out one by one.

“They don’t necessarily have to feel alienated but it’s just a way for students to connect with others in the community and to discuss issues that they are faced with in the community,” Sirina Loeb, coordinator of the Pride Center, said. “It’s a way to support each other.”

Loeb says the group session topics can cover a plethora of issues, ranging from coming out to dating advice.

“I was surprised that we didn’t just talk about gay issues, we hit a lot of awkward and funny topics,” Ana Lopez, a 24-year-old music major, said.

Lopez has only attended two meetings but feels like the experience has helped her come out of her shell.

“I tended to always look down when I was walking along the hallway and felt nervous shaking someone’s hand,” Lopez said. “But after the talks I have more confidence in myself and don’t feel like such a loner.”

Since last spring, Loeb says Tuesday Talks averaged between 12 to 15 students a year. Though the size may seem small, she says this encourages participants to share their thoughts.