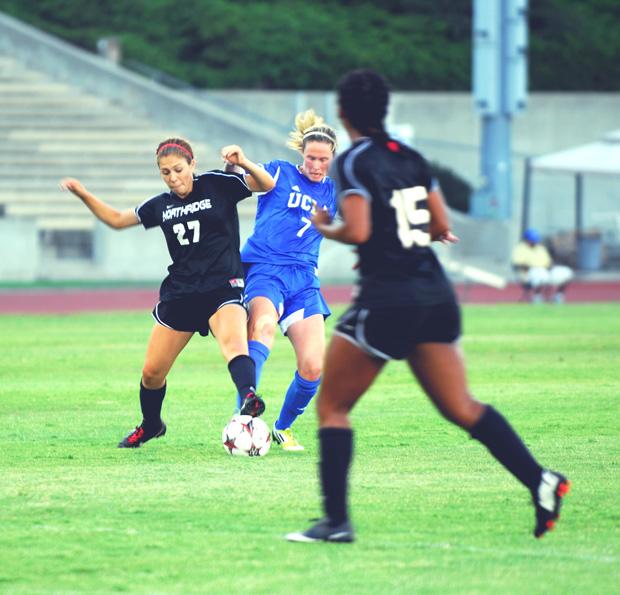 UCLA came out aggressive and scored all three of their goals in the first half putting CSUN on their heels from the start.

It did not take long for the Bruins to strike first as senior midfielder Jenna Richmond found the back of the net from 25 yards out in the third minute of the match. The Bruins added two more goals before halftime, one in the 15th minute and the other in the 39th.

The Bruins 3-0 lead at halftime prompted a change at goalkeeper as freshman Jovani McCaskill replaced freshman Rebecca Harper for the second half. McCaskill faced eight shots in the second half but did not record a save.

Along with the porous defense in the first half, head coach Keith West was not happy with the physicality of his team.

“When you don’t win enough 50/50 balls, you were not physical enough,” West said. “But what if the other team is physical? You just got to keep getting better.”

The speed of UCLA disrupted CSUN’s ability to gain any offensive momentum by creating multiple turnovers at midfield.

“That’s a very fast team,” West said. “I would not say it was an issue for us. They have a little more experience than us and had better qualities at times than us.”

The Matadors had chances to go on the counter attack but were couldn’t put together a series of passes to create regular opportunities like the Bruins were able to.

“They were connecting very well, and getting on the sides of us,” Hobson said. “But at the same time, we also covered back and defended well at times.”

The Matadors began the second half much more aggressive, yet still found themselves defending more than attacking. Senior defender Chloe McDaniel was happy with the way her team did not let down in the second half.

“I thought the character in the second half stood out,” McDaniel said. “With a first half like it was, a team could easily break down and let five or six goals in.”

CSUN had more touches in the second half and held the Bruins scoreless in the last 45 minutes.

“I think keeping a shutout in the second half was a success over all,” McDaniel said.

The Bruins pointed out a few of the Matadors early season weak spots, but McDaniel is confident that they are easily correctable.

“I think it’s easy stuff we can fix. Stuff like communication, some rotations, stuff that every team needs to work on,” McDaniel said.

UCLA controlled the ball for most of the game and outshot the Matadors 14-3.  While McDaniel sees the areas of improvement easily correctable, coach West is pleased with his team at this stage.

“I like the progress we are making,” West said. “If we plan on winning some games, we got to pick up our quality when it counts.”

The Matadors are back in action on Friday, August 30th at USC at 3 p.m.