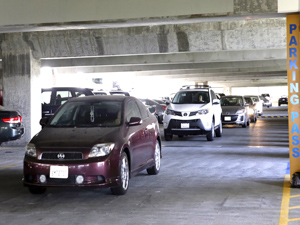 Despite additional traffic enforcement officers, parking at CSUN remains a hassle for students.

Elisabeth Damavandia, a CSUN student who lives seven miles away from campus, knows she has to set aside 20 minutes to search for parking. Damavandia adjusts her schedule for parking during the beginning of the semester and for test dates. This year, Damavandi plans to set aside even more time because of the greater number of incoming students for the fall.

“It takes longer to park than to get here,” Damavandi said.

Although there aren’t any plans to build additional parking structures, some measures have been taken to alleviate the situation. There are about 8,469 student parking spaces available on campus, far less than the 10,000 incoming freshman and transfer students.

“G4 has been converted to 100 percent student parking, when last semester it was all faculty,” said Ken Rosenthal, interim associate vice president of Facilities Development and Operations.

Traffic is at its worst during the beginning of the semester, but officials say it shouldn’t last more than a few weeks.

“We found once you get past the third or fourth week the traffic in parking lots slow down,” said Alfredo Fernandez, captain of CSUN Parking and Transportation.

Fernandez recommends to park in the F10 lot later in the morning. There are extra shuttles, which are available to transport students closer to their classes. However, Fernandez said most parking structures are designed for students and only B2, D6 and E5 are for faculty.

Since heavy traffic is anticipated, over 36 police and traffic officers are helping with monitoring and directing parking.

During the first day of this semester, the G parking lots were filled by 9:30 a.m., which is one hour earlier than it usually fills up, according to Fernandez. All parking spaces were full and traffic officers had to send some students to the north lots.

“As a student I hated looking for parking. It is one of the reasons I moved closer to campus,” said Breanne Valbuena, a CSUN alumna and sign language interpreter.