NFC Preview: 49ers poised to repeat as back to back conference champions 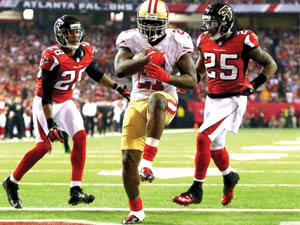 NFC West –  The incumbent NFC champs are the favorite to repeat because of their depth and talent. They do not rely on one or two players, but multiple stars on both offense and defense.

Colin Kaepernick will be in his first full season as the starting quarterback for the 49ers as he led his team to the Super Bowl last season after taking over mid-season for current Kansas City Chiefs quarterback, Alex Smith.

By signing Anquan Boldin, the 49ers gave Kaepernick a veteran receiver who will be the primary target alongside pro-bowl tight end Vernon Davis, while fifth year receiver Michael Crabtree is out indefinitely with a torn achilles tendon.

Complementing their passing game is running back Frank Gore running behind arguably the best offensive line in the NFL. Gore led the team in rushing last season with 1,214 yards rushing and 8 rushing touchdowns and doesn’t show any signs of slowing down.

On the other side of the ball, their defense is one of the most physical units in football. Linebackers Patrick Willis and NaVorro Bowman anchor a 49ers defense that allowed the second fewest points per game last season.

The Seattle Seahawks made one of the biggest splashes in the league last season.  Rookie quarterback Russell Wilson surprised everyone leading the Seahawks to a 11-5 regular season record and a playoff victory.

Seattle was dealt a huge blow this preseason after signing and losing wide receiver Percy Harvin to hip surgery. The Seahawks will now rely heavily on receiver Golden Tate and running back Marshawn Lynch to pick up the slack on offense. Their physical and exciting brand of defense led by cornerback Richard Sherman and linebacker Bobby Wagner will be sure to get the 12th man rocking again come playoff time.

NFC South – Led by quarterback Matt Ryan, the birds of Atlanta have Super Bowl expectations after falling short last year in the conference championship game. Their explosive offense is highlighted by pro-bowl tight end Tony Gonzalez and the dangerous wide receiver duo of Julio Jones and Roddy White on the outside.

The Falcons made a splash in the off-season by signing running back Steven Jackson. Jackson rushed for his eighth straight one-thousand yard rushing season, and had four touchdowns and zero fumbles last year for the Saint Louis Rams. He and teammate Jacquizz Rodgers should help the Falcons re-establish a running attack that was 29th in total rushing yards a season ago.

The Falcons defense relies on the speed of their defensive backs, and despite being in the middle of the pack for most defensive categories, they had the fourth most interceptions in the NFC with 20, and were fifth in the league in points allowed at 18.7.

Last season they had the best record in the NFC, and tied the Denver Broncos for best overall record at 13-3. Look for them to make a deep run in the playoffs.

NFC North – Rounding out the powerhouses in the NFC are the Green Bay Packers, led by Aaron Rodgers and his laser-like accuracy.

The Packers are one of the best passing teams and addressed their running game by drafting Alabama running back Eddie Lacy. Lacy has already had a stellar preseason and will help balance out the pass-happy offense of the Packers.