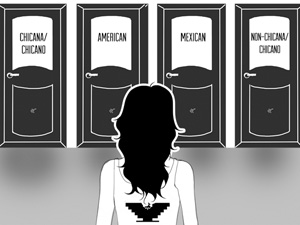 Growing up, I never understood what the terminology meant. My parents defined a Chicana/o as someone who lost their heritage, their true Mexican culture: those who claimed to be better than many undocumented Mexicans attempting to build a better life here, as opposed to south of the border.

Chicanoism was something frowned upon in my family.

I kept that mentality growing up, and although that has changed, I still do not identify with the term Chicana/o.

According to the Texas State Historical Association, the term Chicano came from the Spanish colonization of Mexico. The indigenous population began calling themselves Meshicanos, which was later shortened, converting itself simply into Chicanos.

In a recent article, titled “Chicana/o Identity: An Unresolved Question,” Dr. Rodolfo F. Acuña depicts the controversy behind the true identity of Chicana/os. Acuña is one of CSUN’s most prominent professors, who founded the Chicano studies department in April 1969, at a time when the civil rights movement was at its prime.

Who better than he to stabilize the dilemma? However, even the great Acuña is yet to perceive the true meaning behind the terminology.

The Chicano movement rose in the 1960s, where members of minorities, specifically Mexicans, united to fight for social justices. These included farmworker and day laborer rights, access to higher education for youth and land entitlement.

In a book review of Yolanda Alaniz’s “Viva La Raza: A History of Chicano Identity and Resistance,” Dr. Grace Peña Delgado agrees that the Chicano movement created a barrier between Mexicans and Mexican-Americans, further contextualizing the notion that Chicanoism establishes an acceptance of bi-nationality.

A binational combination of Mexican and American values became the center of identity for those who identified with the term. Ni de aquí, ni de allá (Not from here, not from there). Neither, nor; Chicana/o.

Acuña explains in his article how another active member of the Chicano movement, Dr. Ramón Ruiz, would be scolded upon for signifying to Chicanas/os that they “should bow south to Mexico three times a day and contemplate our navels,” claiming that the majority of the youth who identified with the term had little, to no, knowledge of Mexico’s history.

He points out in his article that the majority of Chicana/o youth claim to have Aztec blood running in their veins and denounce all Criollo blood, people of mixed descent (Spanish and indigenous blood.) After the colonization of Mexico by the Spanish, the Criollo way of life became omnipresent, causing indigenous livelihood to slowly die out and become easily segregated.

As of 2010, Mexican-Americans comprise 63 percent of the Latina/o population in the United States, according to the Pew Hispanic Research Center, and 39 percent of these are immigrants.

Culminating up to the Chicano movement was the Bracero program, established by the U.S. government to enhance labor force, where millions of Mexicans crossed the border. This was one of the largest mass immigration flows coming from Mexico that the U.S. had seen thus far.

“In Mexico, there is no such thing as a mestizo majority and an indigenous minority. There is a variety of groups with cultural differences and alternate lifestyles, some indigenous, some not,” states a report  from the National Commission for the Development of the Indigenous Peoples of Mexico.

As Acuña states, “we should know Mexico. Know the Mexican past in the context of the United States in order to define what Chicanas/os, Latina/os, Indians or other variants are.”

Do I become a Chicana just because I have Mexican roots, I was born in the U.S. and believe in fighting for social justice causes?

Chicanoism is an identity and ideology, an idea of change and greatness that was born from the Mexican-American community.

The Chicano movement emerged out of resistance to oppression, with a massive support from the greater Latina/o community – not just Mexican-Americans.

According to Dr. David G. Gutiérrez, a Chicana/o studies professor from UC San Diego, the movement triggered action from the bigger Latina/o community. Unfortunately, as is common now to define anyone who “looks like a Mexican” to be, in fact, Mexican, it was no different then.

The majority of those who participated in the movement were Mexican-Americans, but what of those who weren’t? Mexicans, Guatemalans, Salvadorans, etc. Are they not to be referred to as Chicana/os, even though they were purposefully active in the movement?

If this be the case, let me be known as a Chicana and, purposefully enough, as a non-Chicana, too. Establishing the do’s and don’ts of an ideology can be a tricky one, especially when those who live by it play by their own rules.

To not identify as a Chicana does not mean to resent the term. Contrary to what my parents believed, I admire those who fought and achieved recognition during the movement, the same way I recognize all others who have rendered their lives in the pursuit of dignity.

I am American, and as true as that is, I am also Mexican. I find my homes to be in two countries where I hold citizenship and where I find many of whom I hold dear. This is not solely due to heritage, for if we were to take heritage into account, the possibilities and outcomes could be endless.

American blood runs through my veins, and by this I mean the entire Americas (North, South and Central).  Has not every single person from one continent or another migrated to and fro? We are not of one sole ethnic bloodline, but of the world’s womb.