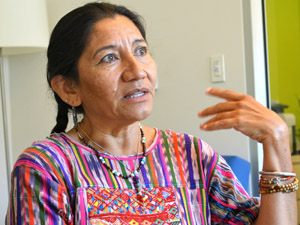 One early morning, Rossana Perez’s husband left for a meeting in San Miguel, El Salvador. He was never  seen again. Perez suspects that he was captured by death squads and dumped on the side of the road. During the Salvadoran Civil War, she lost her husband, family, and her country. When she arrived in Southern California, she was a refugee.

“Unfortunately, people had to take up arms just to be here. In the process we lost a lot. We lost and gained,” said Perez on fleeing from the war  in the 1980s.

Perez interviewed several people who organized committees designed to help Central American refugees. She wrote about their experiences leaving El Salvador in her book, “Flight to Freedom”. One featured story is based on Perez’s experience.

“I want my kids to know the story and history,” Perez said. “History is dependent on who is telling it. I know all of us have a different story to tell. For me, it is important that my kids are proud of their heritage—that they don’t forget that we are Salvadorans.”

Since middle school, Perez has been a political activist in El Salvador. Perez would follow her teachers around as they went on strike. As a student at the National University of El Salvador, she studied philosophy and became involved in the Movimiento de Liberacion Popular (the Popular Movement) that responded to tensions between social classes.

In 1975, student demonstrations were being gunned down by the Salvadoran military for supporting social and economic reform. By the 1980s, the war broke out.

Before Perez could finish her degree, the government placed the university under lockdown for becoming a nest of what they considered to be communism. People were captured or killed, books were burned, and buildings were destroyed, recalls Perez. She had just left the campus on  a bus before the military took the university. From inside the bus, she could see the airplanes lowering and army tanks advancing near campus.

Known for abducting, torturing, and killing people associated with communism and guerrila groups, death squads were a paramilitary group that interrogated people in order to get names and addresses of political activists.

The squads captured, tortured, and interrogated Perez’s family regarding her whereabouts. Perez’s neighbor called her, warning her not to come home. She took her daughter and headed to a friend’s house who lived in a military neighborhood, confident that they would go unnoticed. However, a former babysitter was captured by the death squads and informed them of her location.

Perez was subsequently captured and beaten. The death squad kept her for eight days until The Red Cross came. She was one of 91 prisoners kept for 10 months in a woman’s prison. In 1983, Perez was granted amnesty as a token of good will by Napoleon Duarte, who was elected as President of El Salvador a year later.

After being freed, Perez and her daughter headed to California.

“We wanted to change our reality,” Perez said. “Our idea was not to go on the street and get killed. The idea was to go somewhere and be here.”

Although adapting to a different country was difficult, Perez stuck to what she knew best—organizing committees. Her participation includes being involved in the start of the Central American studies program at CSUN.

Perez and her fellow activists’ work paid off in 2000, when the program was inaugurated and began hiring professors, including Beatriz Cortez and Douglass Carranza.

Perez identifies herself as a founder of the Central American Studies program, but Cortez describes her as being among one of the many contributors to the development of what the program is today.

“Our experience as immigrants in Los Angeles is a collective experience. Nobody has been the founder of our program. The program has existed because of long-term processes and short-term ones,” said Cortez, Central American Research and Policy Institute director. “The support of activists, students, different departments, our college, the administration in this university—but also the support of the Central American community contributed to the construction of the program.”

After being a lecturer at CSUN from 1992 to 2002, Perez enrolled herself in courses, eventually obtaining a bachelor’s degree in English literature in 2009. Currently, she’s working on her interdisciplinary master’s degree in comparative literature, English, and Spanish.

“Through education we can free ourselves. You will be fine if you have an education. Without the training I had as a philosophy student, it would have been harder for me to survive in this country,” Perez said.