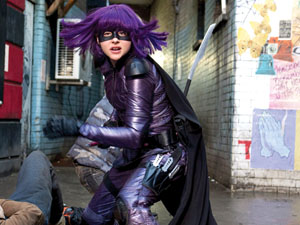 The name John Romita Jr., or “JRJR” to his fans, may ring a bell to readers of “X-Men,” “Daredevil,” “Spiderman” and much more. He’s been a notable figure in the comic book world, having worked as a comic book artist with Marvel since the mid 1970s.

Romita is also the co-creator of the “Kick-Ass” series alongside Mark Millar. He served as an executive producer of the recent film adaptation, “Kick-Ass 2,” starring Chloë Grace Moretz and Aaron Taylor-Johnson. The Daily Sundial had the opportunity to speak with Romita, where he discusses his plans after Marvel, the importance of quality writing and his failed attempt at an acting career.

Daily Sundial: First off, happy early birthday, we know your birthday is tomorrow.

DS: How did you come up with the idea or plot for the “Kick-Ass” series?

JRJR: Mark [Millar] came to me with an idea and he claims that when he was younger he wanted to be a superhero and that he actually took martial arts classes, exercised, had a costume ready and so on. So it’s based on his desire to be a superhero. Interestingly enough, I can’t remember anyone in my neighborhood not wanting to be a superhero. We’d all put costumes on, we would put capes on and jump off things. I think every kid desires to be a superhero.

DS: Did you intend to make “Kick-Ass” more gory and violent in comparison to other things         you’ve worked on? Or was it something that happened naturally?

JRJR: It came to me because of the creative role template which allows freedom to do whatever you want. Mark is that way as far as freedom goes. He wanted to try something new and it kind of perpetuated itself as the story progressed. It was interesting doing something different and I just applied it to my regular storytelling formula that I had done through all the years of discretionary violence of superheroes. It was an interesting combination.

DS: It has been said that some scenes were cut in “Kick-Ass 2” because of its overly sexual violence and vulgarity. Is this true?

JRJR: I’m glad you asked that. There was no such violent sexual scene; there was no graphic rape scene in the book. And it’s been run in a few news-story organizations that the film edited out a graphic rape scene. Absolutely bold-faced lie. There never was a graphic rape scene in the book, we don’t do that. However, there was an indication of, well, there was a rape but it was not shown. And it’s a shame that it’s been told like this. As far as it goes, we didn’t show anything like that. My wife and I watch her soap operas at night and I’ve seen more violence and blood towards women in the current dramas than there was in “Kick-Ass,” and just a little bit more foul language. I’m a little bit annoyed that word is getting around that we show a graphic rape and I know it’s not you that’s calling it…it was long before you and unfortunately it was not that way.

DS: What was your role in the production of the movie? I know you were an executive producer, but did you have any cameos? Did you get to visit the set?

JRJR: No, I’m afraid my movie career has long been killed. I have not been discovered. They were supposed to get us in the film in the big battle scene and I was actually in the battle scene but you couldn’t see me in the back. You can barely see me. [laughs] I was, however, in the first [Kick-Ass], I was behind the bar as a barista and you barely saw me there, but nope, my career has come and gone.

DS: What’s it like to see your drawings/your creations come to life on the big screen? Do you think Chloë Grace Moretz & Aaron Taylor-Johnson captured the essence of the characters?

JRJR: It’s hard to describe and I can’t even get into the artistic part of it. The top of my head blows off when I think about seeing some of my scenes being on the screen and characters being shown onscreen in costumes. I saw my name up on the movie screen and it was the best thing in the world. [laughs] I become a little kid when I see things like that and when someone asks me how does it feel, I can’t come up with any other explanation than, “YEE-HAW!” It’s like going to a sporting event and screaming at the top of your lungs, you know? That’s all I can think of.

DS: Your contract with Marvel has expired and rumor has it that DC wants to bring you on to work on Superman. Have you made a decision yet?

JRJR: I have not and I have to get a lawyer to help me with the negotiations. So right now I’m in an area where I do not know what I’m going to do next and I’m currently in negotiations.

DS: Have you thought about maybe creating your own comic book company?

JRJR: Umm, I don’t know about that, but I do currently have about five or six creator-owned properties. One of them is “The Gray Area” that’s actually been out for a couple of years, and “Shmuggy and Bimbo.” Those are quite tangible and I’ve got four others that I’ve been trying to commit the greatest writers in the business to and hopefully I can get those going. So I may just have a run of projects with my name attached to it, so it’ll be unofficially a company, but not really a company.

DS: The Walking Dead series gained tremendous popularity because of the television show, have you considered maybe creating a series for a television adaptation?

DS: Besides “The Gray Area” and your work on “Shmuggy & Bimbo,” do you have any other projects lined up right now or are you just focusing on those?

JRJR: What I’m going to do with companies is more work-for-hire, but I’m not positive what’s next. There are four other stories that I have notes on and I’ve pitched to some writers. I can give you the names but I’m not sure they’ll do you any good. One is called Jack the Cop, one is called Killing Lucifer, one is called Mable and another is called Stagg. So these are the names of the individual stories, I have notes and I’ve made pitches to some of these great writers, and if they’re interested, well it’s all speculation. It’s all in the future, but maybe down the road I’ll see if these guys are going to follow through on working with me.

DS: In the last year, there’s been a great influx of comic book film adaptations. What’s your take on that?

JRJR: My thought is that in the coming years, there will be less superhero/costume stories and more fantasy, supernatural and scientific fantasy. But there will be a fair share of costumes, because if it’s a quality story it shouldn’t matter if there is a costume involved. A costume isn’t necessary for a quality story, so I honestly think it depends on the story and it depends on the writers.

DS: And you have Robert Kirkman’s “The Walking Dead,” gaining great success and recognition because of its writing as well.

JRJR: There you go. It has a great writer. I looked it up and there’s been like 20,000 Bond movies and the last three have been exceptional. So you can’t say it’s the genre or the franchise that’s weak, I think that you need quality scripts, and a great director and I think that’s what happens. Some movies might become overplayed, but if there’s a quality script for a Spiderman movie or a Superman movie – all you need is a quality script and a quality director.

DS: Out of curiosity, what was your favorite X-men character to draw?

JRJR: Storm, because Wolverine was annoying with that mask! I hated drawing that mask. It made no sense! I also think a blonde African American woman with that kind of power is fascinating.

DS: Well, thank you so much for your time, Mr. Romita. I really appreciate it.

JRJR: Please don’t call me Mr.Romita, call me John. Thank you very much. Thank you so much for a great interview, it was great talking to you.