Obama is not a sign that racism is gone 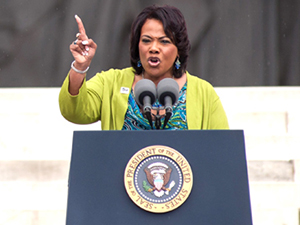 In commemorating the 50th anniversary March on Washington on Aug. 28, the role that race plays in the U.S. has come back into the spotlight. But, really, it never left. Many might like to think that racism is nearly obsolete. After all, we do have our first ever African-American president.

But contrary to what we have been taught, racism was not, and is not, solved by only fighting for proper ethnic representation. We can’t get rid of racism by electing more people of color into positions of power.

It hasn’t worked. It doesn’t work.

During the 2004 Democratic National Convention in a keynote address, Obama said, “…There is not a Black America and a White America and Latino America and Asian America—there’s the United States of America.”

While the sentiment might make some people feel that we are beyond race, beyond individual identity that can be complicated and filled with conflict (especially when tied to historical examples of racism), I was not comforted by this. It was only a reminder that no matter the hue of the person we elect, some places – the entire superstructure of society – are beyond our reach, especially our electoral reach.

Another interesting case of faulty expectations based on ethnic representation is the previous Los Angeles mayor, Antonio Villaraigosa, who did little for the undocumented immigrant population. Now we have Eric Garcetti, said to have some distant Latino blood, who just recently established the Office of Immigrant Affairs, the first of its kind, which was not implemented by proudly Latino Villaraigosa.

If proper ethnic representation were the way, electing Obama would have left a visible dent on the racist structure of this country. But it has not.

Racism has to be critically examined and put into the context of which it was born within its U.S. white supremacist legacy. When you talk about racism, you have to talk about society’s superstructure and the economy.

After all, this country’s foundation and wealth is tied with the legacy of slavery. Was it not the wealth created from chattel slavery for nearly 300 years that rocketed the South and, in turn, the nation’s economy?

Obviously, the abolition of slavery did not solve the problem of racism. The next phase of racism came in the form of Jim Crow laws which ushered in a separate-but-equal barrier. Because of this the civil rights movement began.

If you look to the streets, even the once blatantly racist South (although it’s still there, perhaps their aim at immigrants has taken over), we don’t see police hosing people down or the KKK lynching people.

But we are looking in the wrong place. Let’s look at one of the last vestiges of the institutions of slavery: prisons. The U.S. leads the world in locking up its own people. African-Americans are incarcerated at nearly six times the rate as whites, according to the National Association for the Advancement of Colored People (NAACP).

And when speaking of crime, it has to be mentioned that it is predominantly drug-related offenses. It’s here that one can see the disproportionate treatment and sentencing of crack cocaine offenses as opposed to powder cocaine. In 2002, African-Americans made up 80 percent of the people sentenced under federal crack cocaine laws, according to the NAACP. And, no, black people do not smoke crack more than any other ethnic group; more than two-thirds of crack users are white or Latina/o.

Although Chicana/os, Latina/os and undocumented immigrants have their own unique history and struggles, one unfortunate commonality is that we share experiences with mass incarceration.

Immigration detention centers have sprung up all around the country, holding nearly 430,000 people in more than 250 facilities across the nation, according to the ACLU. Although we don’t share the history of systemic slavery, Chicana/os and Latina/os have had to, and still, deal with racism and discrimination.

Simply, the design of the very system is unjust, unequal and stained with the legacy of racism. Furthermore, the core of most of these injustices share an economic foundation.

One only has  to pick up Michelle Alexander’s book, “The New Jim Crow,” to understand historically racist institutions. There are more African-Americans in jail, prisons, on parole or probation now than there were enslaved in 1850.

Racism has become hidden and normalized.

Credited as being the main architect of the March on Washington, Bayard Rustin, a gay African-American activist and organizer, also spoke against racism and growing economic inequality and injustice in the country. King himself was also constantly critiquing capitalism, U.S. economic policies, the wage gap between African-Americans and other communities of color and whites. It was going to be his next big movement, the Poor People’s Campaign, but he was assassinated shortly before.

On the same steps that her late father spoke on, Rev. Bernice King said during the commemoration that the struggle isn’t over, and that we’re still in a place of economic inequality and injustice.

“Fifty years later, we come once again to this special landing on the steps of the Lincoln Memorial to reflect, to renew and to rejuvenate for the continued struggle of freedom and justice,” Bernice King said.

In fact, most speakers mentioned economic inequality. Good, fine. But it has to be mentioned that fighting racism, in the spirit of King, Rustin and others, the strategy of only electing our people into positions of power isn’t going to eliminate racism and other injustices; it’s only going to change the colors of the gears in the machinery. Changing the face of U.S. imperialism to reflect a historically oppressed group of people may only justify narrow-minded support for the same state crimes and foreign policies.