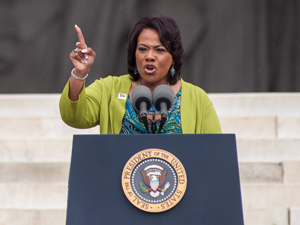 President Obama addressed a crowd of more than 10,000 people on Aug. 28 to pay tribute to Dr. Martin Luther King Jr. and the 50th anniversary of the March on Washington.

The celebration took place at the nation’s capital on the steps of Lincoln Memorial. Obama was one of many speakers who addressed the crowd.

“Five decades ago today Americans came to this honored place to lay claim to a promise made at our founding,” Obama said. “On a hot summer day they assembled here at our nation’s capital under the shadow of the great emancipator to petition their government for redress, and to awaken America’s long slumbering conscience.”

On Aug. 28, 1963 nearly 250,000 black and white Americans marched on Washington to demand justice and freedom for all. It was here that King delivered his speech known throughout the nation as “I Have a Dream”.

King said that the march would be known as “the greatest demonstration for freedom in the history of our nation”. Today’s memorial celebration supports King’s claim.

The memorial was sponsored by the Rev. Al Sharpton’s National Action Network, Martin Luther King III and the NAACP, according to CNN news.

“Today we are still crippled by practices and policies steeped in racial pride, hatred and hostility,” said Bernice King. “We are still bound by a cycle of civil unrest and inherent social biases in our nation and world that often times degenerates into violence and destruction.”

Both Bernice King and Obama mentioned that though the March on Washington was a catalyst in propelling social and economic freedom and equality to where it is today, America still has work to do.

“When millions of Americans of every race and every region, every faith and every station, can join together in a spirit of brotherhood, then those mountains will be made low, and those rough places will be made plain, and those crooked places, they straighten out towards grace,” said Obama.

Johnie Scott, Pan-African Studies professor, said that the election of Obama has had a positive impact on issues of race in America.

“Let’s start with the fact that he is the first non-white to be elected to office,” he said. “That election and re-election also speaks to a shift in the demographics of the country, the diversity of the country. Whites have become the new American minority and now in a culture of diverse country you’ve got Hispanics, blacks, and many many ethnic groups that have become the new majority.”

Caesar deAnda, a freshman undecided major, said that racial segregation has improved since 1963.

“Our school is really diverse. We’re not segregated and we’re all trying to be equal,” deAnda said. “We should treat everyone the same and get to know one another by not making any judgments.”