CSUN professors rock out as musicians on the weekend 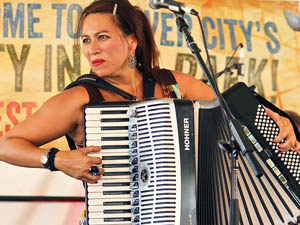 Rabe has been playing the accordion for 38 years, but it all began when a door-to-door salesman selling accordion lessons knocked on her parents’ door when she was nine.

“I always wanted to play music since I was a baby,” said Rabe. “My parents didn’t let me play the drums because ‘little girls don’t play drums.’”

Gigi studied Ethnomusicology, a study that examines cultural, cognitive and social context of music, at UCLA. In college, contrary to her parents’ maxim, she picked up the steel drums and began to sing in a Bulgarian women’s choir.

“I don’t think my parents thought I would pursue a career in music even though I always talked about it,” Rabe said. “I think they would have preferred if I went a more traditional route and got married, had kids and got some sort of office job.”

In the 90s, Gigi was offered a teaching position at CSUN after grabbing the attention of Dr. Mary Shamrock, from the Music Department, playing the steel drum at a “gig” at CSUN.

Gigi is currently the accordion player for a Grammy-nominated Cajun Zydeco band called Lisa Haley and the Zydekats and also plays the accordion for a Brazilian Forro band.

Rabe does not keep her band life a secret from students. At the start of the semester, Rabe shares some of her work and invites students to her shows so that they know that she is really involved in the music business.

In the mid-90s James Craine was mixing records out in London when his manager called him with a new gig. A gig, that to his disappointment was for a glam metal hair band performing at the Oklahoma State Fair.

Realizing that he did not want his last gigs as a musician to be at state fairs, Craine felt that it was time to retire his 20 year career as a rocker and go back to school. Coincidentally, at a visit to CSUN, Craine ran into Robert Hoffpauir, the former graduate adviser, who lured him into studying geography.

“My life has been a series of events determined by being in the right place at the right time,” said Craine.

He completed his master’s degree at CSUN and earned a Ph.D. from U.C. Santa Barbara. In 2002, he started his career as a cultural geography professor.

Today, he continues his adjunct career as a musician in his current band Tank Fight in Death Town, named after an old war comic book.

He has had a long and diverse music career as a bassist playing for a variety of bands; the two primary bands being Cultureside and AK-47.

AK-47 attracted the most publicity with their successful song “The Badge Means You Suck.”The title is based off an alteration of the Houston Police Department’s media campaign  that read “The badge means you care.”

The campaign was launched to counter the negative publicity surrounding the Houston Police’s violent rampages directed toward civilians, particularly minorities.

Along with grabbing the attention of the public, the song, unfortunately, elicited constant harassment from the Houston Police Department.

“Sometimes when we played at shows, the police would just randomly come in and cause problems,” Craine said. “They handcuffed us, and we were even sued by the department.”

Craine recalls how in 1979 after AK-47 opened for the Clash, he and his band members partied with the iconic English punk rockers.

At the party, Craine remembers watching iconic band members Jo Strummer, the Clash’s lead vocalist and guitarist, and Mick Jones, another guitarist, getting into a scuffle. Strummer became upset when Jones interrupted him after a journalist asked Strummer about his political views.

This memory still make Craine chuckle till this day.

When journalism professor Scott Brown is not teaching investigative reporting or grading student’s articles, he is often out playing the bass at a dark and grungy bar with his band “Charlie Don’t Surf.”

The band was named after a famous line from the film “Apocalypse Now.” The phrase was spoken by the reckless Colonel Kilgore, played by Robert Duvall, to justify seizing a beach at the Mekong Delta region from “Charlie,” slang for Viet. Cong, so that the  American soldiers could go surfing.

Brown and guitarist L.J. Scott formed the band seven years ago. It was previously named Finland Station after a train station in Russia famously known for the arrival of Vladmir Lenin by train to start the October Revolution.

Brown looks to the media for inspiration when he writes songs.

“It was incredibly easy to write punk lyrics when George Bush was in office,” said Brown.

Brown explains that his passion for punk and music in general is not something that he mentions in class unless it is relevant to the topic and makes for a good example.

“Sometimes, I will mention something if I see someone wearing a T-shirt with a band name on it,” said Brown. “I will ask ‘How do you know about the Skulls?’ and the student will explain that her father is Billy Bones, vocalist from the Skulls!”

However, for the most part, Brown’s punk rock band life  goes unnoticed by his students.