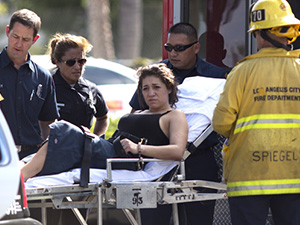 A car crash ended with the arrest of two possibly armed suspects near CSUN Thursday.

The pursuit started at Roscoe and Reseda at 2:55 p.m. and ended around 3:40 p.m. at Darby Avenue and Nordhoff Street.

Toward the end of the pursuit a police squad car performed the Pursuit Intervention Technique (PIT) maneuver, sending the suspect’s car smashing into a tree in front of the Northridge L.A. Public Library.

The two suspects had allegedly committed a robbery a few weeks ago according to Los Angeles Police Department (LAPD). The male driver and female passenger were apprehended and taken into custody.

“A firearm wasn’t recovered but the suspect was armed in the original robbery that occurred a few weeks ago,” LAPD Capt. John Egan said.

LAPD will wait until things stabilize before doing another thorough search for the weapon, Egan said.

Egan also said that the LAPD might contact the fire department because the weapon may have been tossed on a roof.

While pursuing the suspects LAPD contacted CSUN PD and asked for assistance in the pursuit.

“We did help them,” said Anne Glavin, CSUN chief of police. Glavin said that the LAPD helicopter called CSUN PD to “mutually aid” them in the pursuit.

Four helicopters, two from LAPD, searched the surrounding areas after the crash for the suspects.

Katheryn Lopez, 21, senior sociology and criminology major, was leaving her class in Nordhoff Hall when she saw the helicopters.

“When I first came out and saw the helicopters, the first thing that came to my mind was they probably caught the sexual predator that we were hearing about yesterday in school.”

The male suspect received medical treatment for minor injuries sustained when he resisted arrest and was being taken into custody.

The female suspect was arrested and placed on a gurney because she complained of an injury, according to LAPD media relations.

Alma Banuelos, an employee from VIP Outpatient Treatment Center, across the street from the L.A. Public Library, said that the police officers were not supposed to chase down a suspect in front of a public library or next to a school.

“It could have been students or pedestrians or people in there. The cops aren’t supposed to do that here. And everybody is applauding the cops. Yeah they did their job but this is not what they were supposed to do not right here,” Banuelos said. “If I’m right, they’re supposed to wait until the car runs out of gas or something or they’re in an area that’s able for them to do this.”

LAPD said more information will be available once the investigation is complete.

Police officers and firefighters secure the area around the site where two suspects involved in a police pursuit crashed at Darby Avenue and Nordhoff Street.

The suspect’s white Ford is towed away after crashing at Darby Avenue and Nordhoff Street near CSUN.