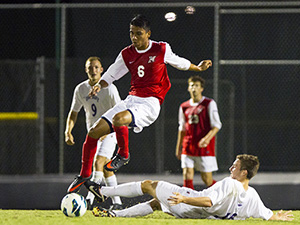 The Matadors (1-0) kicked off their 2013 campaign in thrilling fashion, securing a 3-0 shutout home win over Albany (0-1), in their first game of the Ryan Rossi Memorial Tournament.

Northridge peppered Albany’s goalkeeper Tim Allen from the start, who had to come up with numerous saves just to hold on to a clean sheet in the first half.

Five Matadors had points on the night, and every facet of the team contributed in the win.

”It was just hard work, defensively, goalkeeping, forwards pressing hard, it was an all around team win, 3-0 is always a good win,” said senior forward Brian Behrad. “We were slow at first because they were just defending the whole game, and we’re just harder workers then them- it finally showed when we started scoring goal after goal.”

Redshirt freshman defender Pol Schonhofer-Bartra, opened the scoring for Northridge with a powerful header off a set-piece corner kick in the second half. Two Matadors recorded assists on the play.

Seven minutes later Behrad broke through, heading the ball under the crossbar thanks to a precision placed cross by senior forward Beto Velasquez.

“We’ve been working on these a lot and it went exactly as planned. We work on it in practice and it shows up here in the game,” Behrad said.

The Matadors controlled the tempo from kickoff, barraging the Great Dane defense with 10 shots while only conceding two.

Despite Albany’s dreary offense, sophomore goalkeeper Adam Hobbs was tested late in the first half when an Albany forward broke through CSUN’s defense, found an opening in the box and blasted a shot toward the bottom left corner.

Hobbs was forced to make a great diving save, deflecting the ball out of bounds.

Although Northridge dictated the majority of ball possession in the first half, they didn’t have anything to show for it going into halftime.

“Late in the first half we kind of lost a little bit of control, but in the second half the coach told us what to do-how to manage the game and we picked it up, it was a big team win,” Schonhofer-Bartra said.

The Matador’s offensive assault never let up as they continued to test Allen throughout the second half tallying 12 more shots.

One minute after Behrad’s goal, senior midfielder Chris Smith found the back of the net. After blocking Behrad’s shot, Albany’s defense had a chance to clear the ball but Smith’s persistence paid off as he tracked down the rebound and chipped it home.

Northridge managed to compile three goals in an eight-minute span, deflating any hope for an Albany victory.

The Great Danes posed no threat to CSUN’s lockdown defense in the second half, failing to muster a single shot on goal.

Northridge outshoot Albany 22-4 and finished the game without yielding a corner kick.

The Matadors will take on Memphis in game two of the Ryan Rossi Memorial Tournament on Sunday. Behrad is looking forward to the game, especially if his team can play the way they did tonight.

“If we stay injury free and play our game, I don’t think any team can beat us,” Behrad said.