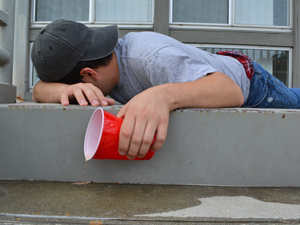 The decision was made after an emotional presentation from the parents of 18-year-old Carson Starkey, a Cal Poly San Luis Obispo student who died from alcohol poisoning in 2008 after attending a fraternity initiation. After their son passed, the Starkeys founded the prevention program and presented it to the CSU board of trustees during a meeting in July 2013.

The Aware Awake Alive program is a peer-to-peer program dedicated to educating students about the dangers of binge drinking.

“The Starkeys made a powerful presentation in front of the board of trustees that nearly brought Chancellor White to tears,” said David Wyatt, a member of the Board of Directors for Aware Awake Alive. “He announced his commitment to the program right there.”

On the night Carson Starkey died, friends were aware that he had became unresponsive and began to drive him to the hospital according to the Aware Awake Alive website. However, out of fear that they or their fraternity would get into trouble they decided to turn around and leave him on a mattress to sleep. He died with a blood alcohol level of .40.

“Carson was someone that instinctively helped other people and he died because other people didn’t help him,” said Scott Starkey in a video posted on the website.

The chancellor’s commitment was made during the review of the sixth biennial report on Campus Alcohol Education and Prevention Programs, said Erik Fallis, media relations manager for CSU.

“As a part of the report we focus on alcohol and other drug awareness programs,” Fallis said. “The chancellor believed Aware Awake Alive would fit right into the infrastructure [of alcohol education] that we already have on many campuses.”

The Alcohol Education and Prevention programs report shows a general decrease in dangerous alcohol activities across all 23 campuses. The report highlighted different programs from each campus that have been effective in increasing awareness.

The report stated that CSUN agreed to be committed to continuing alcohol awareness education, particularly “with an emphasis on high-risk behaviors and targeted student groups to ensure continued improvement in alcohol-related measurements.”

CSUN freshman Dalton Kebely is preparing to rush this week and doesn’t think the Greek system is to blame for binge drinking.

“I believe whether or not a student decides to drink is a choice of their own. There can be pressure and outside influences that may encourage irresponsible behavior, but in the end it’s your own decision,” Kebely said.

In a different study, the CDC also reported that binge drinking among young women is becoming

a serious concern where one in eight U.S. adult women and one in five high school students binge drink. The age range of 18-24 had the highest intensity and frequency of  binge drinking, according to the CDC.

Aware Awake Alive are trying to take a non-judgmental approach to alcohol education, making it more like a buddy system where friends can save other friends’ lives, Wyatt said.

“The program has online source material and a mobile app that helps identify symptoms of alcohol poisoning,” Fallis said.

The website has a feature called the “toolbox” which allows those interested in putting together an alcohol awareness presentation to drag and drop materials into their very own customized toolbox, Wyatt said.

The toolbox has customized features including videos, stories, and statistics which can be specifically picked out to cater to different groups such as high school students, college students, athletes and those involved in Greek life.

“There is also a mobile application, drunkordying.mobi, that helps students identify the symptoms of alcohol poisoning in the moment,” Wyatt said. “It is really easy to use, and you don’t need to download it from the app store.”

Drunkordying.mobi provides information about alcohol poisoning as well as symptoms to be aware of.  Wyatt said White is also committed to translating the app into Spanish.

“I think a mobile app [for identifying alcohol poisoning] would be useful because technology is so prevalent today,” said Erica Perlman, graduate social work major.  “Most students are reliant on smart phones and if someone is unaware of the symptoms, just like anything else, they will probably use their phones for answers.”

Another goal of the organization is to support legislation that provides limited immunity to underage individuals who may seek help in an alcohol-related emergency, Wyatt said.

“It can be hard to tell if someone is experiencing alcohol poisoning or just drank a little too much,” Kebely said. “ If the person starts to vomit or even begins to black out I would seek some medical assistance for the sake of their life. If I saw some unusual behavior that I hadn’t seen before I would probably look that up and  try to see what I could do for them.”

California is one of eight states that have passed legislation providing immunity to minors who make the call to 911, even if they are the one who bought the alcohol, according to Aware Awake Alive.

“The endorsement of the CSU system which has 437,000 students is huge for [Aware Awake Alive] which started as a grassroots organization,” Wyatt said. “We hope that students will use the tools it provides with a sense of ownership, not that they are just being told by the CSU system that they need to use it. That’s what happened at Cal Poly. They made it their own.”