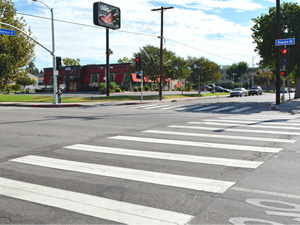 A new traffic signal was installed at the heavily trafficked and high-risk intersection of Reseda Boulevard and Dearborn Avenue on Aug. 20, 2013.

The traffic signal is about half a block west of campus and CSUN PD reminds pedestrians and drivers to remain vigilant while traveling through the area.

CSUN Kinesiology major Josh Pang rides his bike through the intersection on his daily commute to and from CSUN. Before the signal was installed, Pang would avoid crossing at Dearborn Avenue. Instead, he would would go out of his way each day to cross at Nordhoff Avenue or north at Prairie Street. Now that the intersection is controlled with a traffic light Pang said he saves time by crossing at Dearborn Avenue.

“Before you had the crosswalk you took a risk,” Pang said. “Even though it was legal, I didn’t feel really safe. Every time I crossed I got a little scared. But now, I don’t have that feeling anymore. I now cross here more often.”

In the past the intersection had been consistently plagued by motor vehicle and pedestrian accidents, most recently on Sept. 12, 2012, when a 19-year-old woman was struck by a hit-and-run driver.

In 2009, CSUN Chinese exchange student Yao Lu was struck and nearly killed by another hit-and-run driver two blocks north of Reseda Boulevard and Vincennes Street. In that case, outcry from residents and businesses prompted the installation of a traffic light at the intersection.

At the Dearborn Avenue intersection, LA City Councilman Mitch Englander advocated for the traffic signal’s installation. Englander represents the city’s District 12 on the city council, and CSUN is within District 12 territory.

“Our office pushed to have a signal installed at this location because we have known for many years that it is dangerous,” Englander said in an article published by the Daily Sundial on Feb. 27, 2013. “We have known about every one of the pedestrian collisions.”

According to figures made available by the Los Angeles Police Department (LAPD) and published by the Daily Sundial in February, 42 pedestrians have been struck by cars at the intersection since 2008, and 19 of those incidents were hit-and-runs.

In 2010, CSUN police and LAPD conducted a sting operation that yielded more than 100 violations given to drivers who did not give pedestrians the right of way.

National Transportation Safety Board records list California, Florida and Texas as the states with the highest number of pedestrian deaths.

LA ranks among the top five cities in pedestrian deaths, along with New York, Chicago, Phoenix, and Houston.

The biggest cause of accidents, said Anne P. Glavin, CSUN chief of police and director of Police Services, is distracted behavior from drivers and pedestrians alike.

“I have my iPhone in my hand. I’m going through my emails. I’m walking on a campus sidewalk. I get to the curb, my head is down — I don’t look right, I don’t look left,” Glavin said. “And my expectation, apparently, is cars are just going to stop because I, the pedestrian, have stepped into the crosswalk. And you know what? They don’t.”

Motorists are also guilty of distracted driving, Glavin said. She has seen people attempt to drive while using a phone, eating, and even reading a book.

“They get to the intersection and roll to a stop while looking at this,” Glavin said, motioning to her phone. “Somebody comes off the curb, I don’t see them — whack!”

While it is hoped that the new signal at Dearborn Avenue will help curb the amount of incidents at the intersection, it is not a “save all” strategy Glavin said. Motorists and pedestrians need to be aware of their surroundings at all times.