American amnesia may lead to war with Syria 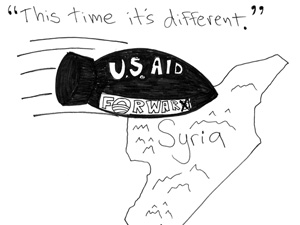 President Obama just recently announced that he is seeking congressional approval for a military strike against Syria. This time though really guys, he said, it’s gonna be different. Like, seriously.

More or less, that’s what the president said, with witty paraphrasing done by the author of this article.

Obama and his supporters, including Secretary of State John F. Kerry, Vice President Joe Biden, Defense Secretary Chuck Hagel, Arizona Senator John McCain, U.S. House Speaker John Boehner, House Minority Leader Nancy Pelosi and other U.S. officials and top lawmakers are beating the drums of war. The president’s urgent message of striking against Syria comes as a needed response in the face of thousands of people that have been hurt or killed by chemical weapons. They have argued the case that military intervention is needed in order to protect the Syrian people.

But as of now, there is no case for strikes against President Bashar al-Assad.

In the face of allegations that Syrian President Bashar al-Assad used chemical weapons against his own people – or that at least it has not been irrefutably proven – both Kerry and Biden have gone as far as to say that any delay of military strikes, U.S. intervention and more analysis is divergent and unnecessary.

And don’t let anyone trick you or pressure you into thinking that you can only be a fanatic pro-Assad supporter or an anti-Assad pro-war supporter. You can, and I would argue should, see the Assad presidency as one that has committed many crimes against its population in the context of a civil war. It’s messy and many have portrayed the civil war as having only two sides: Assad versus its unified population.

In the Aug. 28 edition of the Los Angeles Daily News, the front page headline read, “Ready to Strike?” all in caps, showing a Syrian man holding up his iPhone with a picture of his family back in Syria. They were killed in the chemical attacks that took place Aug. 21, allegedly by Assad’s government forces. In the same issue, but in a separate news story by AP reporter Albert Aji on the U.S.’s looming involvement with Syria, Vice President Biden expressed support for intervening in Syria. Furthermore, Biden said even speculation that anyone other than Syrian President Assad could have been behind the attacks is “fanciful.”

“Suggestions that there’s any doubt about who’s responsible for this are as preposterous as a suggestion that the attack did not occur,” Carney said.

And this sort of shaky rhetoric of war has become the government’s popular opinion.

Daily News is not, by any means, the only media outlet to give dominating coverage to notions that these attacks were done by Assad forces. Go to CNN’s website and virtually all articles are on Syria, with arguments for military intervention – in and out of the opinion’s section.

Let’s be clear. And for me to do so, I had to read for weeks on different stories, different websites, speak with different people, on what is really going on in Syria. And even then, I claim no expertise on Syria. But in spite of this, reading articles published in The Guardian, Christian Science Monitor, CBS, The Mint Press News and other sources, some credible, some not, argue that members of the armed opposition in Syria have claimed responsibility for the chemical attacks. Furthermore, the rebels claimed to have received the weapons from Saudi nationals.

Take that for what you will. There is still no case that can be made against Assad.

William Polk probably wrote the best sober assessment on the U.S.’s looming involvement with Syria. Published in the Atlantic Monthly on Sep. 2, in a two-part essay introduced by James Fallows, Polk outlines the problems of going to war with Syria.

In this essay, Polk makes the points that there are still things that we don’t know, and therefore shouldn’t be acting upon. Primarily, he tackles the chemical weapons attacks. He puts forth, and answers, 13 questions on military involvement with Syria – making the case that the U.S., with the information that it currently has, should not attack Syria.

Everyone should read it, but more importantly Obama and other war-supporters should too.

Prior to these chemical attacks, I was part of a group discussion on Syria, the rebels, Assad and the history of the country led by Ziad Abu-Rish, a doctoral candidate in the Department of History at UCLA. He is also co-editor of 2012 The Dawn of the Arab Uprisings: End of an Old Order? published by Pluto Press.

Abu-Rish presented a very sad reality of Syria. The rebels are not a unified, cohesive unit. Some are foreign to Syria, coming from and receiving substantial help from places such as Turkey, Tunisia, Libya, Chechnya and Saudi Arabia. Some are jihadists and al-Qaeda supports. Some are secular.

He went on to say that there is very little militarily that the U.S. can do that will not further destroy Syria. But support should be given to refugees, a large percentage which have gone to Jordan, and humanitarian efforts.

War, as the nearly-dead cliche saying goes, is not the answer.

In a video interview of Syrian Ambassador Bashar Ja’afari by Christiane Amanpour on Sept. 3, she says that proof has come out that Assad was behind the chemical attacks, based on a former Syrian forensic chemical doctor.

“There is a forensic syrian chemical weapons expert who has defected, according to the opposition, and is now in Turkey and will, he says, make public what he knows about the regime’s involvement in the use of chemical weapons. That is going to seal this situation, isn’t it?” Amanpour said.

Let’s look at that line of logic. Is she suggesting that if there is enough allegations, then it’s perfectly justifiable to go to war? Is going to war different than treating someone in a courtroom as guilty before trial.

This line of logic is contradictory to all forms of justice. If Assad is found guilty of using chemical weapons against his own people, which is not an easy thing to prove, then try him in international court. But if it is found that it is not definitely provable that the government used chemical weapons against the Syrian people, then the U.S. has only two options: back off or suffer the consequences of the world seeing the U.S. as an imperialist nation with aggressive military expansion and dwindling support from its citizenry.

More than half the U.S. population does not want war against Syria, according to a Reuters/Ipsos poll. But, really, that has never stopped the U.S. from going to war before. And it won’t now.