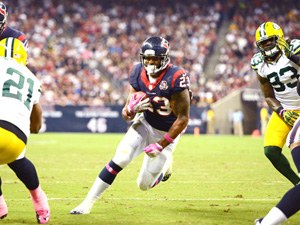 The Denver Broncos are the heavy favorites to win the AFC with an arsenal of offensive and defensive weapons. Led by Peyton Manning, the offense will go as he does.

Their passing attack was led by Demaryius Thomas with 94 catches and 10 touchdowns, and Eric Decker with 85 catches for 13 touchdowns. Despite losing Brandon Stokley, the Broncos replenished their receiving core after signing wide receiver Wes Welker from the New England Patriots.

The Broncos defense is anchored by pro-bowlers Champ Bailey and Von Miller as well as emerging linebacker Wesley Woodyard. This trio creates nightmares for opposing offenses.

Atlanta, on the other hand, did not have a very eventful off-season but their most notable moves were the resigning of future hall of fame tight end Tony Gonzalez, and the signing of running back Steven Jackson. They now have a strong running attack to compliment the aerial attack of Matt Ryan and arguably the best wide receiver tandem in the game, Roddy White and Julio Jones.

Along with a high-powered offense last season, their defense ranked fifth in the league in points allowed per game at 18.7. Led by cornerbacks Asante Samuel and Robert McClain, the Falcons are set up to rival any team in the league.

Both the Denver Broncos and Atlanta Falcons have the right players and schemes to win the Super Bowl. Both are equipped with strong quarterbacks, wide receivers, running backs, and stellar defenses, but the x-factor goes to the Broncos.

Having Peyton Manning as their quarterback makes the Broncos the favorite to win.  He has been to two Super Bowls already (winning one), and the four-time NFL MVP will lead the Denver Broncos to be the 2013-14 Super Bowl champions over the Falcons.

With an 11 game winning-streak intact heading into the 2012 playoffs, the Denver Broncos were expected to contend for a Super Bowl title. Those aspirations were cut short by Joe Flacco’s last second Hail Mary pass which sent the game into double-overtime, and Denver out of the playoffs.

After Von Miller returns from suspension, expect them to make a lengthy run to New Jersey.

Unlike the Broncos, the San Francisco 49ers reached the Super Bowl, but saw their title hopes slip away after they were stopped 7 yards short of the goal line.

A quarterback controversy surfaced following head coach Jim Harbaugh’s decision to start rookie Colin Kaepernick in favor of veteran Alex Smith. The decision paid off as Kaepernick led them all the way to the Super Bowl, setting a single-season record for rushing yards by a quarterback in a playoff game, with 181 yards.

The strength of the 49ers is their defense led by All-Pro selections Patrick Willis, NaVorro Bowman, and Justin Smith. Add Kaepernick’s experience to this defense, and no one has it better than San Francisco.

In the NFL, offense doesn’t win championships, balance does, and the 49ers are the most even-keeled team in the league.

Every season, football fans wonder who will come out on top of the AFC: Brady or Manning? This year, the answer is neither. It’s… Matt Schaub.

The Texans’ stingy defense saw an upgrade as ball hawk Ed Reed joined the squad fresh off of winning a Super Bowl, and injured middle linebacker Brian Cushing returned from an ACL tear which caused him to miss most of the 2012 campaign.

Drafting wideout DeAndre Hopkins to complement the Texans’ deadly aerial assault, which routinely sees Andre Johnson haul in more than 1,500 yards a season, will help take the pressure off Johnson, who was targeted on a whopping 58.1 percent of Schaub’s passes last season.

Halfback Arian Foster should also see improvement due to the addition of fullback Greg Jones, who helped Maurice Jones-Drew gain more than 7,000 yards, making him the league’s sixth-leading active rusher.

The climbing ages of Brady and Manning, along with the Texans’ improvements, should have them atop the AFC.

Think the Niners will repeat? Think again. Not only has dynamic Quarterback Colin Kaepernick lost the element of being unknown, San Francisco’s off-season acquisitions won’t put them ahead of Aaron Rodgers and the Green Bay Packers.

Lacy, who played for the Alabama Crimson Tide last year, finished his 2012 campaign with 1,322 yards and 17 touchdowns. It’s no secret that Green Bay’s run game has been weak over the last couple of seasons, but the addition of Lacy gives them the complete package.

To make the most accurate prediction for the Super Bowl, one must first look at which teams had top tier defenses in the league last year. In the NFC, San Francisco 49ers allowed an NFC best 205.8 yards per game last season

The 49ers’ front seven is a formidable beast led by linebacker Patrick Willis and the nonbiological Smith brothers, Justin and Aldon, who combined for 22.5 sacks last season. In addition, they added pro-bowler Nnamdi Asomugha to their secondary, beefing up an already dangerous and explosive defense.

Their success will fall on quarterback Colin Kaepernick and his ability to manage the game and minimize mistakes. It helps that Kaepernick has a new toy in Anquan Boldin but his shaky connection with tight end Vernon Davis will need to be resolved in order for them to make an appearance in New York in February. They have all the tools needed to take home Mr. Lombardi.

In the AFC, my pick is the Houston Texans who have the NFL sack leader, J.J. Watt, who brought down opposing QB’s 20.5 times last season. A defense’s best friend is a great running game, and in that department, Houston excels. Halfback Arian Foster has proved to be a top-tier running back who has one of the best offensive lines in the league.

On top of that, they added Super Bowl champion Ed Reed to an already potent defense. The Texans will punch their ticket to the Big Apple to face the 49ers in February at MetLife Stadium in Super Bowl 48.