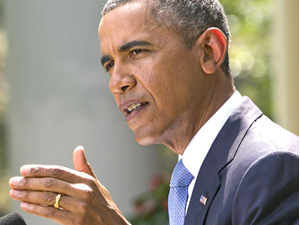 President Barack Obama won the support of important lawmakers Tuesday in his campaign for a military response to the Syrian government’s alleged use of chemical weapons on Aug. 21, which killed 1,400 Syrians according to the Obama administration.

While congress remains divided, top House Republicans and Democrats have expressed support for limited military action, meaning no U.S. troops on the ground will be involved.

Less than a year ago, President Obama declared that if Syrian President Bashar al-Assad and his regime, or the rebels fighting Assad, used chemical or biological weapons, a “red line” would be crossed, possibly triggering a U.S. military response.

According to an intelligence report published Aug. 30, the White House claimed with “high confidence” that Assad’s regime crossed that “red line” when it attacked the suburbs of the Syrian capital of Damascus with chemical warfare.

According to the report, 426 children were among the more than 1400 Syrians killed. The report also claimed that there is “no indication that opposition has carried out a large-scale, coordinated rocket and artillery attack like the one that occurred on August 21.”

“The United States is going to have to go [through] great lengths to not only prove that chemical weapons were used, but also [to prove they were] used by the government,” said Mitchell.

In response to fears that U.S. involvement in the Syria crisis would lead to a full-fledged war, Obama is arguing that there are no parallels to the beginning of the Iraq war in 2003.

“This is not Iraq, and this is not Afghanistan,” Obama said to reporters Tuesday.

The alleged use of chemical weapons

Mitchell said Obama’s decision to seek congressional approval was very important and essentially a “no lose situation” for the president.

“If congress authorizes this, then you can say that he consulted with the legislatures and they supported his initiative policy, which then gives him more foundation,” Mitchell said. “And if congress does not support it, then he can say he tried to do the right thing and they wouldn’t back me on it. They represent the American people and [Obama] did what the constitution calls for.”

Mitchell said going unilaterally, which means the U.S. will intervene on its own, is a very risky idea. Meanwhile, most people will ask the question “why the U.S.?”

“Why does the United States have to go in and be the self-appointed policemen of the world? You end up picking and choosing the atrocity that means something,” said Mitchell.

Lauren Nitta, a psychology major at CSUN, said that although the U.S. is still hurting financially from the previous military involvement, something needs to be done to solve the situation.

“It’s totally unjust. You know he’s using chemical weapons against his own people so that’s something that needs to be taken care of,” Nitta said. “We are one of the world powers and we have a lot of alliances so maybe getting those involved and getting others involved too would work. There’s power in numbers.”

Syria, from uprising to civil war

Syria, a Middle Eastern country known officially as the Syrian Arab Republic, has a population of more than 21 million people. The capital of Syria is Damascus and the major language spoken in the country is Arabic.

When the Arab Spring swept over Syria in March 2011, it began as a protest against an authoritarian regime.

“It started as a more peaceful movement to demand president Bashar regime to reform dictatorship and bring about democratic rules and principles into the politics of Syria,” said Nayereh Tohidi, the founding director of the Middle Eastern and Islamic Studies program at CSUN.

Tohidi said that president Bashar did not want to share power and responded to the protest with extreme violence.

“Gradually the movement became radicalized and militarized and when you repress a non-violent movement so violently, people either get depressed or you invite radical elements that are looking for an opportunity to [take] advantages of peoples frustration,” Tohidi said.

Tohidi said that countries such as Iran, Turkey, Jordan and especially Saudi Arabia’s involvement in the Syrian conflict turned the Syrian protest to a “war by proxy.” It also reinforced the sectarian nature of the war, which occurs when violence erupts between different sects of one specific ideology or religion within a nation.

“It basically became a hegemonic, masculinist power game between Shiites led by Iran and Shia Hezbollah in Lebanon and Sunnis led by Saudi Arabia,” said  Tohidi. “The regional power game are using the poor Syrian people as the primary victims.”

Syria and the international standoff

Tohidi said the international proxy and power game between Russia and U.S. also changed the face of the protest while creating a worldwide “moral bankruptcy.”

“We have been waiting over two years while people have been bombed by a government that is killing its own people while abuse has been committed on both sides but nobody has done anything,” Tohidi said.

Russian president Vladimir Putin recently said he is “convinced that [the chemical attack] is nothing more than a provocation by those who want to drag other countries into the Syrian conflict, challenging the U.S. government to illustrate the evidence for a necessary military intervention to the UN Security council.

Since 2011, the 15-nation security council with a primary goal to maintain international peace where each member has a vote, has been intensely divided on Syria.

Jordan Bradley, senior history major, said that no matter what the U.S. decides to do, the outcome will remain negative.

“I think there are long term repercussions on whatever we end up doing.” said Bradley. “There’s already two million displaced refugee so is this really going to solve things or is it going to perpetuate things? I guess time will tell.”