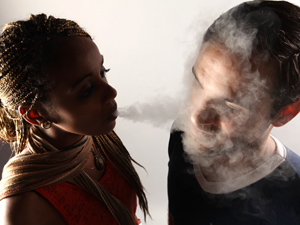 This may be a path CSUN could soon take.

About 1,182 schools nationwide have applied smoking bans. Of those schools, 800 have banned all forms of tobacco, including chewing tobacco, according to the Americans for Nonsmokers’ Rights (ANR), the leading national lobbying organization for nonsmokers’ rights.

The effort to encourage healthier, tobacco-free lifestyles originally started at the community college level, but the movement has grown to encompass larger campuses according to ANR.

Jose Rodriguez, an undeclared incoming freshman, visited the campus for the first time last week during his orientation.

“I came and took a tour around the campus and we came around to one of the outside eating areas and even though they are marked with signs, we breathed in a lungful of smoke,” Rodriguez said. “It kind of sucks that I’m going to have to deal with it. I have a big problem with that.”

The Campuses Organized and United for Good Health (COUGH) at CSUN  advocates for a variety of tobacco-related issues on college and university campuses throughout California.

CSUN President Dianne Harrison recognizes COUGH and the effort they have been putting forth by speaking at the board of trustees meetings.

“My background is actually prevention and from the standpoint, if I were the only vote, I would ban it. But I’m not the only vote and I don’t want to do it that way,” Harrison said.

As a former smoker, Harrison acknowledge  that “100 percent consensus” from both sides of this debate will never exist.

“But it would be nice for us (to agree) as a university community that should be concerned about health and wellness and what kind of modeling we can do for others as a healthy campus environment.”

This year alone, the ANR added five universities with multiple campuses in different locations, 21 campuses total, to its list of institutions that have banned smoking or all forms of tobacco.

For CSUF, the issue was first brought to light with a questionnaire within their Academic Senate. The Academic Senate, along with their Associated Students Inc. (ASI), agreed and submitted their proposal.

Samuel Morales, a political science major and CSUF graduate who was chosen to sit on the Smoking Ban Steering Committee, was named by the president of the university as the student representative.

“By not smoking on university property, CSUF can better protect those who choose to not smoke from the effects of secondhand smoke, as well as help those who are trying to quit tobacco,” Morales said.

Morales guided the policy until taking effect, while also holding the position of chief administrative officer for ASI.

“I held a campaign called ‘Be Tuff, Don’t Take the Puff,’” Morales said. “(It was) aimed to not only inform students but also promote cessation programs offered on campus.”

Any information regarding the new policy was made available through CSUF’s various media outlets, which included e-mail messages, portal announcements, CSUF News, The Daily Titan and local news channels. Great effort was made to educate students on the status of the policy, and to garner more support in order to guarantee its approval.

Dr. Gabriela Chavira, an associate  psychology professor said it’s the right decision to ban smoking at CSUN and in most public spaces.

“Students who smoke just outside the Sierra Towers around the vents, (allow) the smoke to come in the air conditioner vents, so it feels like I’m smoking,” said Chavira.

Although Justin Galanto, a 28-year old English major, has tried to quit, he said people judge him as a smoker.

“I was cool quitting until the semester started,” Galanto said. “I don’t think smoking is good for people but it sucks to be a smoker sometimes just because you feel alienated or looked down upon.”

The questions Harrison looks to answer involve whether or not our campus should become a smoke-free or tobacco-free campus and if we do, how will it be enforced? Would the university police issue tickets to students, faculty or staff that violate the ban?

“I’m posing the issue for discussion and brainstorming for the campus so that by the end we’ll have a small work group that pulls all this together and makes a recommendation,” Harrison said.