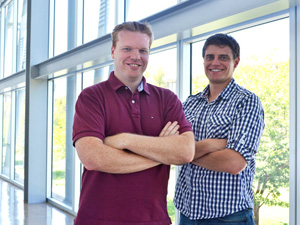 “Shocked,” “honored” and “excited” are words that CSUN Cinema and Television Arts alumni Ryan Mallick and Steve Brown use to describe how they feel about their recent Emmy Award nomination for Outstanding Picture Editing for Reality Programming.

The two men were given nods for their editing work on “Project Runway,” a Lifetime network reality television show hosted by former supermodel Heidi Klum that pits aspiring fashion designers against each other as they compete in a series of challenges to create perfect runway-quality outfits.

At first, Mallick couldn’t believe he had been nominated, let alone twice. He had to double-check to be sure it was not an error.

“It was a surprise,” Mallick said. “I did a double-take.”

Brown and Mallick work for Van Nuys-based Bunim/Murray Productions, a post-production company credited for its work in establishing the reality television genre, most notably MTV’s “The Real World.”

Other reality shows nominated for the 2013 editing Emmy include “Survivor,” “The Amazing Race” and “Deadliest Catch.”

The nomination, they said, has taken time to sink in. People who they haven’t talked to in years are reaching out and expressing their congratulations.

“As it’s grown in the last month, you realize how big of a deal this is,” Mallick said. “You get to work and everyone’s talking about it. Then it gets you excited.”

With their Emmy nominations, both men feel they have reached the pinnacle of their occupation and are thrilled to have a nomination under their belts so early in their career. The industry today, both men said, is such that people can work their way up quickly without having to wait 10 or 15 years to become successful.

“I know, for me, I always think it felt like it was just a lot of being lucky, as far as how I got to start editing,” Brown said. “I always felt I ended up being in the right place at the right time. Opportunity is being there for when those opportunities arrive. When you are given those opportunities, you have to take them, no matter how hard they are.”

“I wasn’t editing, but I did have my foot in the door. That’s kind of the most important step coming out of college. Once you get in there and do that hard work, and you’re dedicated, you will move on,” Brown said

Both alumni attribute their ability to get jobs after college — and later work on “Project Runway” — to networking. Networking, they say, is a key if students are looking to land a job in the television industry or any industry.

Professionally, Brown has worked on 20 different shows. “Project Runway” is Mallick’s first job as an editor. Previously, he worked as an assistant editor on the show.

Networking worked well for Mallick, since it was Brown who got him a job at Hollywood-based World of Wonder Productions, one of the first companies Mallick worked for. While still an assistant editor for “Project Runway” at Bunim/Murray, Mallick mentioned to Brown — who, at the time, also worked at Bunim/Murray — that he had applied for a full editor position at World of Wonder. As such, Brown was able to put in a good word to his bosses about Mallick.

“It works all around,” Brown said. “You scratch my back, I scratch yours.”

Brown’s wife, Christina, an office manager in CSUN’s sociology department, is looking forward to attend the nationally televised Primetime Emmys ceremony on Sept. 22 as well. As voting members of the television academy, Mallick and Brown will be able to attend the primetime ceremony.

“I was proud of them,” she said of finding out about her husband and Mallick’s nominations. “It’s a pretty big deal.”

Christina is excited to be able to dress up and possibly rub elbows with celebrities.

As far as deciding on what to wear, she already has an idea.

“It’s a very extensive process,” she said with a laugh.

Mallick gives this advice to students looking to pursue a career in the industry: “You have to have hard work and dedication,” he said. “There are so many types of jobs in this industry — creative and non-creative. No one should ever give up. If you really want to work in this industry, you can.”