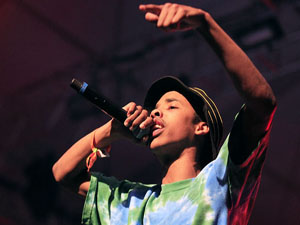 Arguably the most talented member of the mischievous tag team, Odd Future Wolf Gang Kill Them All, 19-year-old Earl Sweatshirt’s label debut “Doris,” is a true testament to his resonating maturity and unmatched lyricism.

In 2011, Odd Future Wolf Gang Kill Them All cult fanatics pondered over the mystery of where the group’s most promising rapper had disappeared to. Earl Sweatshirt, born Thebe Neruda Kgositsile, had been sent off to a reform school in Samoa upon his mother’s request because of his drug use and lyrics about rape. Returning to the states at age 18, the slightly reserved Earl signed a record deal with Sony and has refrained from using drugs.

Earl’s new album is a compilation of scattered thoughts running through a mature, yet barely legal teenager trying to delve into the competitive rap game. Don’t listen to the album with the intent of trying to understand him, open your ears to experience the grimy beats and ferocious flow.

The album begins with “Pre,” as guest rapper SK La’ Flare spits a generic verse about mollies and murder. Skip over this track to hear Flare’s cousin, Frank Ocean, rap about his choice to stay sober on “Sunday.”

Fellow west coast rapper, Vince Staples, clowns on Earl’s emotional state on the Neptune’s produced “Burgundy”. “Why you so sad and depressed all the time like a little bitch?/Don’t nobody care about how you feel, we want raps.” Earl’s complexities begin to reveal themselves through his verse, “I’m afraid I’m going to blow it/And when them expectations raising because daddy was a poet, right?”

Earl’s father, Keorapetse William Kgositsile, is a renowned South African poet and is alluded to over a few verses on “Chum”. “It’s probably been twelve years since my father left/And I just used to say I hate him in dishonest jest/When honestly I miss this ni—a”. Laying out a mind map of his deepest insecurities, “Chum” is the hardest hitting track on the album. “Too black for the white kids, and too white for the blacks/From honor roll to cracking locks up off them bicycle racks/I’m indecisive, I’m scatterbrained, I’m frightened, it’s evident.” Despite having a record deal with one of the leading music industries Earl’s songs are not suitable for mainstream listeners on their morning commute.

Mac Miller makes an appearance on “Guild,” providing evidence of what an artist can produce without the overbearing restrictions of censored radio. “Moms love me cause I’m so commercial/I fuck ‘em raw cause I know they fertile/In Myrtle Beach with a purple fleece/Hotel lobbies playing Fur Elise.” Ending the album with a meditative backdrop, Domo Genesis and Earl rap about the success they have achieved without the guidance of a father on “Knight.” Earl’s flow runs like the water in your kitchen sink; unfiltered and unstoppable.

Earl’s release of “Doris” has proven that age is just a number with an introspective look into the complexities and vulnerability of a young rap prodigy.